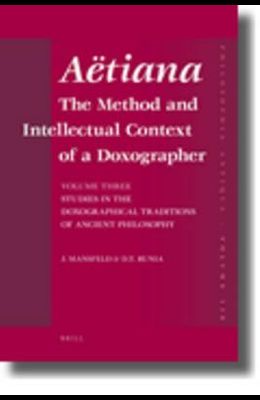 Aëtiana: The Method and Intellectual Context of a Doxographer, Volume III, Studies in the Doxographical Traditions of Ancient P

Ancient doxography, particularly as distilled in the work on problems of physics by Aetius, is a vital source for our knowledge of early Greek philosophy up to the first century BCE. But its purpose and method, and also its wider intellectual context, are by no means easy to understand. The present volume contains 19 essays written between 1989 and 2009 in which the authors grapple with various aspects of the doxographical tradition and its main representatives. The essays examine the origins of the doxographical method in the work of Aristotle and Theophrastus and also provide valuable insights into the works of other authors such as Epicurus, Chrysippus, Lucretius, Cicero, Philo of Alexandria and Seneca. The collection can be read as a companion collection to the two earlier volumes of Aetiana published by the two authors in this series (1997, 2009).