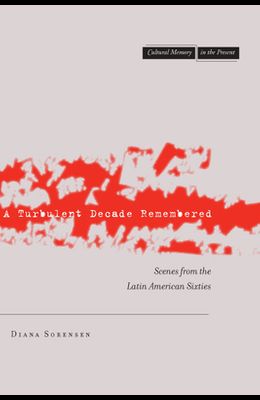 A Turbulent Decade Remembered: Scenes from the Latin American Sixties

A Turbulent Decade Remembered studies the 1960s--the continental moment that marked Latin America's full entry into both modernity and post-modernity in the international arena. Delving into scenes of importance for the intersection of aesthetics and politics, the book addresses the impact of the Cuban Revolution on the imagination of the decade, the student movements of 1968 in their international context, and the tragic events of Tlatelolco, memorialized in different ways by Mexico's greatest intellectuals. In examining the construction of the great novels usually identified as the Boom, the book revises the critical tradition established since the late sixties, rethinking the oft-cited magical realism, while considering the role of the press, prizes, gendered networks of solidarity and competition, and the emergence of a literary star system. The implications of all these forces of the republic of letters are set in dialogue with an analysis of the major novels of the decade, with particular attention to their literary craft, their manipulation of space, voice, and varied readerships.