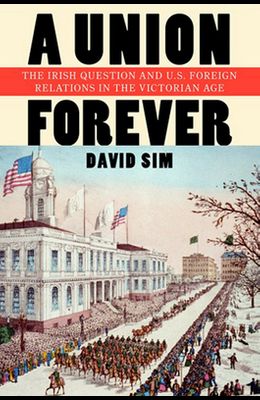 In the mid-nineteenth century the Irish question--the governance of the island of Ireland--demanded attention on both sides of the Atlantic. In A Union Forever, David Sim examines how Irish nationalists and their American sympathizers attempted to convince legislators and statesmen to use the burgeoning global influence of the United States to achieve Irish independence. Simultaneously, he tracks how American politicians used the Irish question as means of furthering their own diplomatic and political ends. Combining an innovative transnational methodology with attention to the complexities of American statecraft, Sim rewrites the diplomatic history of this neglected topic. He considers the impact that nonstate actors had on formal affairs between the United States and Britain, finding that not only did Irish nationalists fail to involve the United States in their cause but actually fostered an Anglo-American rapprochement in the final third of the nineteenth century. Their failures led them to seek out new means of promoting Irish self-determination, including an altogether more radical, revolutionary strategy that would alter the course of Irish and British history over the next century.