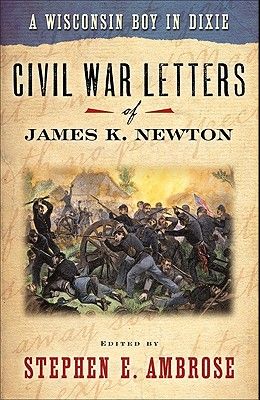 Unlike many of his fellows, James Newton] was knowledgeable, intuitive, and literate; like many of his fellows he was cast into the role of soldier at only eighteen years of age. He was polished enough to write drumhead and firelight letters of fine literary style. It did not take long for this farm boy turned private to discover the grand design of the conflict in which he was engaged, something which many of the officers leading the armies never did discover.--Victor Hicken, Journal of the Illinois State Historical Societ y When I wrote to you last I was at Madison with no prospect of leaving very soon, but I got away sooner than I expected to. So wrote James Newton upon leaving Camp Randall for Vicksburg in 1863 with the Fourteenth Wisconsin Volunteer Infantry. Newton, who had been a rural schoolteacher before he joined the Union army in 1861, wrote to his parents of his experiences at Shiloh, Corinth, Vicksburg, on the Red River, in Missouri, at Nashville, at Mobile, and as a prisoner of war. His letters, selected and edited by noted historian Stephen E. Ambrose, reveal Newton as a young man who matured in the war, rising in rank from private to lieutenant. A Wisconsin Boy in Dixie reveals Newton as a young man who grew to maturity through his Civil War experience, rising in rank from private to lieutenant. Writing soberly about the less attractive aspects of army life, Newton's comments on fraternizing with the Rebs, on officers, and on discipline are touched with a sense of humor--a soldier's best friend, he claimed. He also became sensitive to the importance of political choices. After giving Lincoln the first vote he had ever cast, Newton wrote: In doing so I felt that I was doing my country as much service as I have ever done on the field of battle.

From the Back Cover A Wisconsin Boy in Dixie reveals Newton as a young man who grew to maturity through his Civil War experience, rising in rank from private to lieutenant.