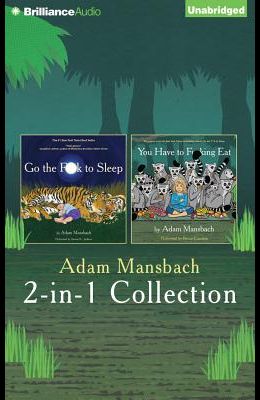 by
Adam Mansbach and Samuel L Jackson and Bryan Cranston

Go the F**k to Sleep Go the F**k to Sleep is a bedtime book for parents who live in the real world, where a few snoozing kitties and cutesy rhymes don't always send a toddler sailing blissfully off to dreamland. Profane, affectionate, and radically honest, it captures the familiar--and unspoken--tribulations of putting your little angel down for the night. Beautiful, subversive, and pants-wettingly funny, Go the F**k to Sleep is an audiobook for parents new, old, and expectant. You probably should not play this for your children. You Have to F**king Eat Emmy Award-winning actor Bryan Cranston ( Breaking Bad , Malcom in the Middle ) follows in the exasperated footsteps of Samuel L. Jackson, giving voice to the long-suffering father whose indifferent child will just not eat in this hilarious follow-up to Adam Mansbach's international bestseller, Go the F**k to Sleep . Mansbach's long-awaited sequel is about that other great parental frustration: getting your little angel to eat something that even vaguely resembles a normal meal. Profane, loving, and deeply cathartic, You Have to F**king Eat breaks the code of child-rearing silence, giving moms and dads (new, old, grand-, and expectant) a much-needed chance to laugh about a universal problem. Anchored by a hilarious performance from Cranston, You Have to F**king Eat is the perfect blend of talented voice actor and subversive fun that expertly captures Mansbach's trademark humor. Due to its explicit language, you probably shouldn't play this one for your kids.