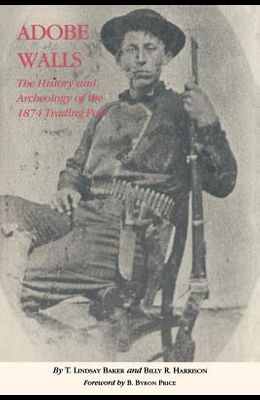 Adobe Walls: The History and Archaeology of the 1874 Trading Post

In the spring of 1874 a handful of men and one women set out for the Texas Panhandle to seek their fortunes in the great buffalo hunt. Moving south to follow the herds, they intended to establish a trading post to serve the hunter, or hide men. At a place called Adobe Walls they dug blocks from the sod and built their center of operations After operating for only a few months, the post was attacked one sultry June morning by angry members of several Plains Indian tribes, whose physical and cultural survival depending on the great bison herd that were rapidly shrinking before the white men's guns. Initially defeated, that attacking Indians retreated. But the defenders also retreated leaving the deserted post to be burned by Indians intent on erasing all traces of the white man's presence. Nonetheless, tracing did remain, and in the ashes and dirt were buried minute details of the hide men's lives and the battle that so suddenly changed them. A little more than a century later white men again dug into the sod at Adobe Walls. The nineteenth-century men dug for profits, but the modern hunters sere looking for the natural time capsule inadvertently left by those earlier adventurers. The authors of this book, a historian and an archeologists, have dug into the sod and into far-flung archives to sift reality form the long-romanticized story of Adobe Walls, its residents, and the Indians who so fiercely resented their presence. The full story of Adobe Walls now tells us much about the life and work of the hide men, about the dying of the Plains Indian culture, and about the march of white commerce across the frontier.