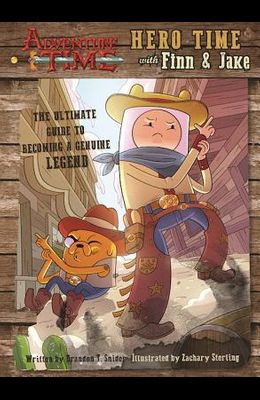 Adventure Time: Hero Time with Finn and Jake: The Ultimate Guide to Becoming a Genuine Legend

When grass ogres, Nightosphere demons, and hooligans threaten the helpless citizens of Ooo, Finn the Human and Jake the Dog are on the scene to defeat evil and school the world on the art of coming to the rescue. Now Ooo's most epic duo has written the ultimate guidebook to rescuing princesses, exploring deadly dungeons, and performing other generally heroic deeds. Passed back and forth between Finn and Jake during their adventures, this battle-scarred notebook also contains commentary from Princess Bubblegum, Marceline, BMO, and other inhabitants of the Land of Ooo. Chock full of removable items such as an ultimate Wizard Battle poster, BMO's Wheel of Heroic Deeds, and other carefully preserved artifacts, Hero Time by Finn and Jake is the last word on saving the world from unspeakable evil. TM & (c) Cartoon Network (s15)