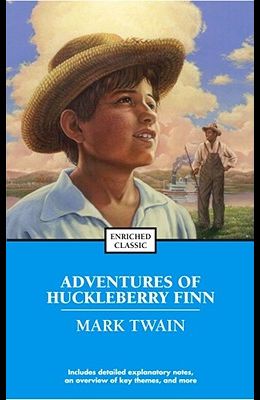 Timeless classics of American and world literature are repackaged in these Enhanced Classics editions. From love stories to adventures to addressing the social matters of their day, these immortal books are available for a new generation to study.

From the front Cover All modern American literature comes from one book by Mark Twain called Huckleberry Finn, Ernest Hemingway wrote, It's the best book we've had. A complex masterpiece that has spawned volumes of scholarly exegesis and interpretative theories, it is at heart a compelling adventure story. Huck, in flight from his murderous father, and Nigger Jim, in flight from slavery, pilot their raft thrillingly through treacherous waters, surviving a crash with a steamboat, betrayal by rogues, and the final threat from the bourgeoisie. Informing all this is the presence of the River, described in palpable detail by Mark Twain, the former steamboat pilot, who transforms it into a richly metaphoric entity. Twain's other great innovation was the language of the book itself, which is expressive in a completely original way. The invention of this language, with all its implications, gave a new dimension to our literature, Robert Penn Warren noted. It is a language capable of poetry.