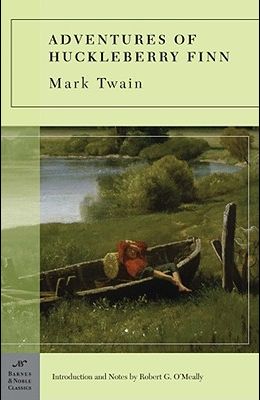 The Adventures of Huckleberry Finn, by Mark Twain, is part of the Barnes & Noble Classics series, which offers quality editions at affordable prices to the student and the general reader, including new scholarship, thoughtful design, and pages of carefully crafted extras. Here are some of the remarkable features of Barnes & Noble Classics: New introductions commissioned from today's top writers and scholars Biographies of the authors Chronologies of contemporary historical, biographical, and cultural events Footnotes and endnotes Selective discussions of imitations, parodies, poems, books, plays, paintings, operas, statuary, and films inspired by the work Comments by other famous authors Study questions to challenge the reader's viewpoints and expectations Bibliographies for further reading Indices & Glossaries, when appropriate All editions are beautifully designed and are printed to superior specifications; some include illustrations of historical interest. Barnes & Noble Classics pulls together a constellation of influences--biographical, historical, and literary--to enrich each reader's understanding of these enduring works. Adventures of Huckleberry Finn is the only one of Mark Twain's various books which can be called a masterpiece. I do not suggest that it is his only book of permanent interest; but it is the only one in which his genius is completely realized, and the only one which creates its own category. T. S. Eliot Huckleberry Finn, rebel against school and church, casual inheritor of gold treasure, rafter of the Mississippi, and savior of Jim the runaway slave, is the archetypical American maverick. Fleeing the respectable society that wants to sivilize him, Huck Finn shoves off with Jim on a rhapsodic raft journey down the Mississippi River. The two bind themselves to one another, becoming intimate friends and agreeing there warn't no home like a raft, after all. Other places do seem so cramped up and smothery, but a raft don't. You feel mighty free and easy and comfortable on a raft. As Huck learns about love, responsibility, and morality, the trip becomes a metaphoric voyage through his own soul, culminating in the glorious moment when he decides to go to hell rather than return Jim to slavery. Mark Twain defined classic as a book which people praise and don't read; Huckleberry Finn is a happy exception to his own rule. Twain's mastery of dialect, coupled with his famous wit, has made Adventures of Huckleberry Finn one of the most loved and distinctly American classics ever written. Nominated for a Grammy for his work as co-producer of the five-CD box set The Jazz Singers (1998), Robert O'Meally is Zora Neale Hurston Professor of Literature at Columbia University and Director of Columbia University's Center for Jazz Studies. He is the principal writer of Seeing Jazz (1997), the catalogue for the Smithsonian's exhibit on jazz and literature, and the co-editor of The Norton Anthology of African American Literature (1996).

0
|   0  reviews
Did you read Adventures of Huckleberry Finn? Please provide your feedback and rating to help other readers.
Write Review