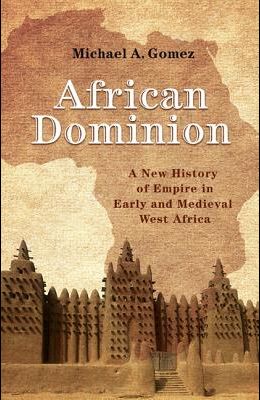 African Dominion: A New History of Empire in Early and Medieval West Africa

A groundbreaking history that puts early and medieval West Africa in a global context Pick up almost any book on early and medieval world history and empire, and where do you find West Africa? On the periphery. This pioneering book, the first on this period of the region's history in a generation, tells a different story. Interweaving political and social history and drawing on a rich array of sources, including Arabic manuscripts, oral histories, and recent archaeological findings, Michael Gomez unveils a new vision of how categories of ethnicity, race, gender, and caste emerged in Africa and in global history more generally. Scholars have long held that such distinctions arose during the colonial period, but Gomez shows they developed much earlier. Focusing on the Savannah and Sahel region, Gomez traces the exchange of ideas and influences with North Africa and the Central Islamic Lands by way of merchants, scholars, and pilgrims. Islam's growth in West Africa, in tandem with intensifying commerce that included slaves, resulted in a series of political experiments unique to the region, culminating in the rise of empire. A major preoccupation was the question of who could be legally enslaved, which together with other factors led to the construction of new ideas about ethnicity, race, gender, and caste--long before colonialism and the transatlantic slave trade. Telling a radically new story about early Africa in global history, African Dominion is set to be the standard work on the subject for many years to come.

From the Back Cover African Dominion is a stunning achievement. It restores precolonial Africa to historical attention and places the continent--marked by intelligent leadership, sophisticated knowledge, vibrant trans-Saharan commerce, and the dynamic impact of Islam--at the center of a global world. Michael Gomez offers a flowing narrative of innovations between the tenth and sixteenth centuries, when Africa was ahead of many other places around the world, and he provides a new understanding of caste, race, slavery, ethnicity, and gender as they evolved centuries ago. Brilliant, fascinating, and original, this is a revolutionary book. --Toyin Falola, University of Texas at Austin In this brilliant book, Michael Gomez, one of the most accomplished historians of Africa, completely renews our understanding of the long, rich story of West Africa by focusing on the continuity between the great empires of Ghana, Mali, and Songhay. He has succeeded in reconciling the history of Africa with itself and its diasporas. --Boubacar Barry, University Cheikh Anta Diop, Dakar, Senegal A masterful account of early West African history, this authoritative book fills a major gap. It will long remain one of the most important works on--and be essential to debates about--precolonial West Africa. --Andreas Eckert, Humboldt University of Berlin Utterly original and elegantly narrated, African Dominion provides a more complete, complex, and comparative picture of West Africa than previously available. It will have radical implications. --Mamadou Diouf, Columbia University

List of All Editions of African Dominion: A New History of Empire in Early and Medieval West Africa