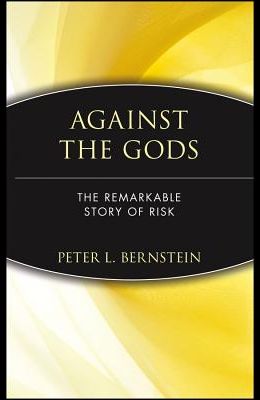 Against the Gods: The Remarkable Story of Risk

In a narrative that reads like a novel, this work tells the story of a group of famous scientists and ingenious amateurs who actually discovered the option of risk--of scientifically linking the present to the future. It blends biography with history and science to show how famous thinkers paved the way from superstition to the super computer.

From the Back Cover Advance Praise for Against the Gods With his wonderful knowledge of the history and current manifestations of risk, Peter Bernstein brings us Against the Gods. Nothing like it will come out of the financial world this year or ever. I speak carefully: no one should miss it.-John Kenneth Galbraith Professor of Economics Emeritus, Harvard University No one else could have written a book of such central importance with so much charm and excitement. -Robert Heilbronerc author of The Worldly Philosophers A fascinating and unusual perspective on modern man's Promethean attempt to master risk. The book reads easily and provokes thought-a rare combination. -William Kristol Editor and Publisher, The Weekly Standard Peter Bernstein leads us effortlessly through the history of risk because he writes so beautifully. This is a book on a left brain subject that will have right brain readers lining up for more!-Robert Ferguson Managing Director, Bankers Trust Australia Limited In Against the Gods, Peter Bernstein, a scholar, historian, and successful investor gives us the history of great thinkers whose visions put the future at the service of the present.-Dr. Marc Faber Managing Director, Marc Faber Limited, Hong Kong This looks like a new classic to me.-Barton M. Biggs, Chairman Morgan Stanley Asset Management, Inc. It's a sizzler!-Charles P. Kindleberger author of Manias, Panics & Crashes In this unique exploration of the role of risk in our society, Peter Bernstein argues that the notion of bringing risk under control is one of the central ideas that distinguishes modern times from the more distant past. Against the Gods, a narrative that reads like a novel, chronicles the remarkable intellectual adventure that liberated humanity from the oracles and soothsayers by means of the powerful tools of risk management that are available to us today. This is a richly-woven tale of Greek philosophers and Arab mathematicians, of merchants and scientists, gamblers and philosophers, world-renowned intellects and obscure but inspired amateurs who helped discover the modern methods of putting the future at the service of the present, replacing helplessness before the fates with choice and decision. When investors buy stocks, surgeons perform operations, engineers design bridges, entrepreneurs launch new businesses, astronauts explore the heavens, and politicians run for office, risk is their inescapable partner. Yet their actions reveal that risk today need not be feared: managing risk has become synonymous with challenge and opportunity. Bernstein presents fascinating vignettes of such towering intellects as Omar Khayyam, Pascal and Bernoulli, Bayes and Keynes, Markowitz and Arrow, and Gauss, Galton and von Neumann. With his engaging literary style, he clarifies the concepts of probability, sampling, regression to the mean, game theory, and rational versus irrational decision making. The final sections of the book raise important questions about the role of the computer, the relationship between facts and subjective beliefs, the impact of chaos theory, the role of the burgeoning markets for derivatives, and the looming dominance of numbers. Against the Gods: The Remarkable Story of Risk is that rare book that turns the most profound issues of our time into pure reading pleasure.