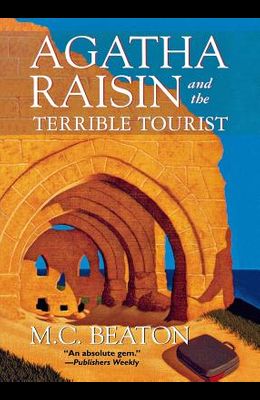 Agatha Raisin and the Terrible Tourist continues the tradition in M. C. Beaton's beloved Agatha Raisin mystery series--now a hit show on Acorn TV and public television. Agatha Raisin's marriage was put off when her ex-husband showed up, unfortunately alive. Fortunately, he was murdered and Agatha solved the crime. Now she is off to Cyprus to track down her ex-fiance. Instead of enjoying their planned honeymoon, however, they witness the murder of an obnoxious tourist. Two sets of terrible tourists surround the unhappy couple, arousing Agatha's suspicions. And, much to James' chagrin, she won't rest until she finds the killer. Unfortunately, it seems the killer also won't rest until Agatha is out of the picture. Agatha is forced to track down the murderer, try to rekindle her romance with James, and fend off a suave baronet, all while coping with the fact that it's always bathing suit season in Cyprus.