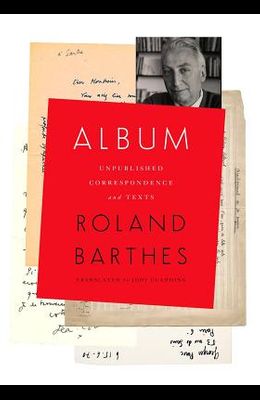 by
Roland Barthes and Jody Gladding

Album provides an unparalleled look into Roland Barthes's life of letters. It presents a selection of correspondence, from his adolescence in the 1930s through the height of his career and up to the last years of his life, covering such topics as friendships, intellectual adventures, politics, and aesthetics. It offers an intimate look at Barthes's thought processes and the everyday reflection behind the composition of his works, as well as a rich archive of epistolary friendships, spanning half a century, among the leading intellectuals of the day. Barthes was one of the great observers of language and culture, and Album shows him in his element, immersed in heady French intellectual culture and the daily struggles to maintain a writing life. Barthes's correspondents include Maurice Blanchot, Michel Butor, Jacques Derrida, Michel Foucault, Julia Kristeva, Claude L'vi-Strauss, Georges Perec, Raymond Queneau, Alain Robbe-Grillet, Marthe Robert, and Jean Starobinski, among others. The book also features documents, letters, and postcards reproduced in facsimile; unpublished material; and notes and transcripts from his seminars. The first English-language publication of Barthes's letters, Album is a comprehensive testimony to one of the most influential critics and philosophers of the twentieth century and the world of letters in which he lived and breathed.