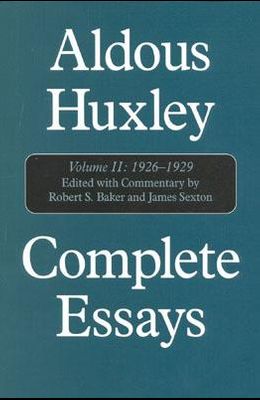 by
Aldous Huxley and Robert S Baker and James Sexton

These first two volumes of a projected five, in preparation for several years, begin a major publishing venture, collecting the complete essays of one of the giants of modern English prose and of social commentary in our time. The first two volumes span the most productive period of Huxley's career. Volume I begins with his essays for Gilbert Murray's Athenaeum and his music essays for the New Westminster Gazette. Volume II continues through the 1920s and includes his controversial essays on India and the empire in Jesting Pilate. The essays of both volumes range from nuanced assessments of art and architecture to political analyses, history, science, religion, and art, and a newly discovered series on music. Wide-ranging, allusive, and witty, they are informed by the probing skepticism of a highly educated and ironically incisive member of the English upper middle class. Huxley's fascination with the codes and conventions of European culture, his growing apprehensions about the menacing collapse of the European political order, and his awareness of the impact of science and technology on the post-Versailles world of England, France, Germany, and the United States form the basis for his critique. His subjects overlap with the satirical novels he wrote during the period between the wars, culminating in Point Counter Point and Brave New World. At their best, these essays stand among the finest examples of the genre in modern literature.