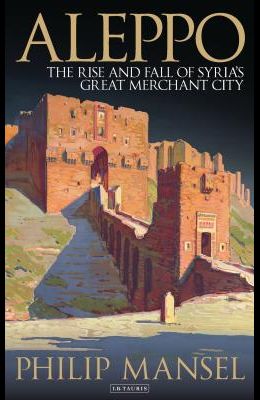 Aleppo: The Rise and Fall of Syria's Great Merchant City

A Times Literary Supplement Book of the Year This book will stand as a eulogy for the city. - Anthony Satin, The Literary Review Aleppo lies in ruins. Its streets are plunged in darkness; most of its population has fled, its memories ravaged. But this was once a vibrant world city, a trade and cultural hub at the end of the Silk Road famous for its food and music, a place where Muslims, Christians, and Jews lived and traded together in peace. Few places were as ancient and diverse. In this heartbreaking and powerful history of one of the world's oldest, continuously-inhabited cities, author Philip Mansel chronicles the many lives of Aleppo, successively ruled by the Assyrian, Persian, Greek, Roman, Arab, Ottoman, and French empires. In Part I, Mansel details the city's lives over the centuries, including her rise under the Ottomans, when Aleppo became that empire's third largest city after Constantinople and Cairo. In Part II, Mansel has assembled 15 historical accounts of Aleppo, many of them never published before, ranging from the early 1600s to 1920. Written by British and French merchants, consuls, and archeologists, these accounts chronicle more than four centuries of life in the city, with each entry filled with details noting the physical beauty of the place - her orchards and terraced gardens, her country houses and famous walls, her ancient Roman dwellings still used by the locals, her places of worship, and more. Included in the accounts are Alexander Russell's famed natural history from 1756, and a reproduction of Baedeker's map from 1912, at the height of the city's Ottoman period and before World War I would change the region forever. With more than 250 notes and an extensive bibliography of related titles published in both English and French, Aleppo: The Rise and Fall of Syria's Great Merchant City is a remarkable piece of scholarship, but also a tragic reminder that even in the 21st century, humanity can witness the loss of a great city, a traditional pinnacle of cultural and economic power, and a place of beauty.