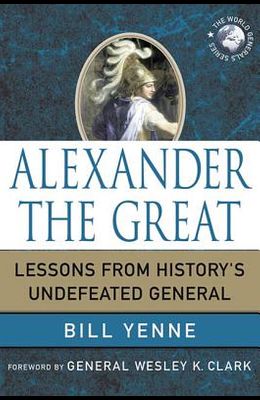 When the Oracle of Delphi told Alexander the Great that he was invincible, it was right. The son of the great King Philip II of Macedonia, Alexander was educated by Aristotle and commanded a wing of his father's army in the victory over the Thebans and Athenians at the Battle of Chaeronea--all when he was still just a teenager. By the time of his death at age 32, he had amassed an empire that stretched from the Adriatic Sea to the Indus River and included all of Persia and most of Egypt. He ruled as both the shah of Persia and as a pharaoh of Egypt by right of conquest, and he was also crowned king of Asia. Here, historian Bill Yenne illuminates the legendary vision of this classical hero. Exhibiting the best traits of a battlefield leader, Alexander was audacious, aggressive, fearless and victorious. His unfailing integration of strategic vision and tactical genius took him to the ends of the earth, and into immortality as a military leader. Alexander's influence on cultural and political history and the scope of his military prowess remains awe-inspiring to this day.

Books similiar to Alexander the Great