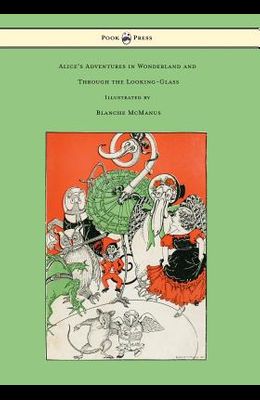 'Alice's Adventures in Wonderland', and its sequel 'Through the Looking Glass' are two classics of the children's literature genre - written by the English author Charles Lutwidge Dodgson (1832 - 1898). Better known by his pseudonym, Lewis Caroll, the author masterfully tells the story of a little girl named Alice, who falls through a rabbit hole into a fantasy world populated by very peculiar creatures. This story is followed with her re-entry (about six months later) into this fantastical universe, this time by climbing through a mirror into the world that she can see beyond it. This book is beautifully illustrated by Blanche McManus (1869 - 1935), an American writer and artist, famed for her delicate watercolours and sinuous lines. She brings Caroll's unique form of 'literary nonsense' to life, superbly bringing about a balance between the written word and the artists imagination.