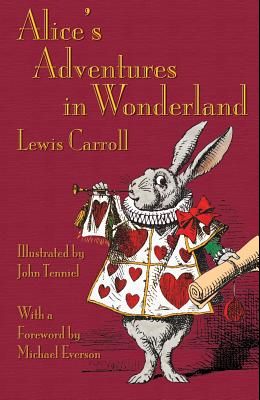 Book #2 in the Alice's Adventures in Wonderland Series
by
Lewis Carroll and John Tenniel and Michael Everson
$16.99
Select Format

Lewis Carroll is a pen-name: Charles Lutwidge Dodgson was the author's real name and he was lecturer in Mathematics in Christ Church, Oxford. Dodgson began the story on 4 July 1862, when he took a journey in a rowing boat on the river Thames in Oxford together with the Reverend Robinson Duckworth, with Alice Liddell (ten years of age) the daughter of the Dean of Christ Church, and with her two sisters, Lorina (thirteen years of age), and Edith (eight years of age). As is clear from the poem at the beginning of the book, the three girls asked Dodgson for a story and reluctantly at first he began to tell the first version of the story to them. There are many half-hidden references made to the five of them throughout the text of the book itself, which was published finally in 1865. The text for this edition is based on the text established on the basis of Selwyn Goodacre's version of Lewis Carroll's final revised text of 1897; Goodacre's edition is augmented with certain corrections, and elimination of errors. To that text a number of further alterations have been made in order to correct some inconsistencies which remained, or which were introduced, in Carroll's final revised text.