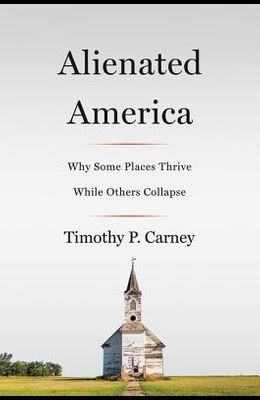 Alienated America: Why Some Places Thrive While Others Collapse

Now a Washington Post Bestseller. Respected conservative journalist and commentator Timothy P. Carney continues the conversation begun with Hillbilly Elegy and the classic Bowling Alone in this hard-hitting analysis that identifies the true factor behind the decline of the American dream: it is not purely the result of economics as the left claims, but the collapse of the institutions that made us successful, including marriage, church, and civic life. During the 2016 presidential campaign, Donald J. Trump proclaimed, the American dream is dead, and this message resonated across the country. Why do so many people believe that the American dream is no longer within reach? Growing inequality, stubborn pockets of immobility, rising rates of deadly addiction, the increasing and troubling fact that where you start determines where you end up, heightening political strife--these are the disturbing realities threatening ordinary American lives today. The standard accounts pointed to economic problems among the working class, but the root was a cultural collapse: While the educated and wealthy elites still enjoy strong communities, most blue-collar Americans lack strong communities and institutions that bind them to their neighbors. And outside of the elites, the central American institution has been religion That is, it's not the factory closings that have torn us apart; it's the church closings. The dissolution of our most cherished institutions--nuclear families, places of worship, civic organizations--has not only divided us, but eroded our sense of worth, belief in opportunity, and connection to one another. In Alienated America , Carney visits all corners of America, from the dim country bars of Southwestern Pennsylvania., to the bustling Mormon wards of Salt Lake City, and explains the most important data and research to demonstrate how the social connection is the great divide in America. He shows that Trump's surprising victory was the most visible symptom of this deep-seated problem. In addition to his detailed exploration of how a range of societal changes have, in tandem, damaged us, Carney provides a framework that will lead us back out of a lonely, modern wilderness.

From the Back Cover Should you be more worried about a church closing in your town than a factory closing? During the 2016 presidential campaign, Donald Trump proclaimed, The American Dream is dead, a message that resonated across the country. Washington Examiner editor Timothy Carney traveled Middle America, pored over county-level maps and data, and sorted through sociological studies, and had a startling revelation: Donald Trump is right, but the death of the American Dream is a social phenomenon, not an economic one. In some parts of the United States, life seems to be getting worse because citizens are facing their problems alone. These communities have seen declines in marriage, voting, church attendance, and volunteer work. Even when money comes back to town, happiness does not return if people there do not reengage. The educated and wealthy elites, on the other hand, tend to live in places where institutions are strong, or have enough money to insulate themselves. Carney visits all corners of America, from the dim country bars of southwestern Pennsylvania to the bustling Mormon wards of Salt Lake City, and provides the most important data and research to explain why failing social connections are responsible for the great divide in America. Alienated America confirms the conservative suspicion that these places cannot be fixed with job-training programs or more entitlement spending, and backs up the liberal belief that new Trump voters are not coming to his rallies to support corporate tax cuts or Obamacare repeal. Tim Carney will change the way you look at the challenges facing modern America and presents a framework for leading us out of the wilderness.

Other social classes & economic disparity books you might enjoy