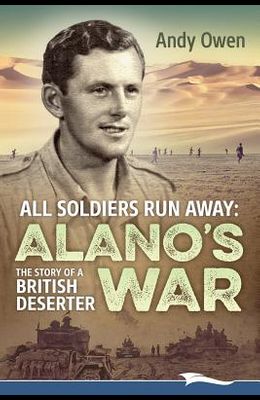 All Soldiers Run Away: Alano's War The Story of a British Deserter

Andy Owen invites us to reflect on the morally and psychological difficult question of why soldiers desert in war - and how we do, and should, respond to their desertion. He weaves his own experience of battle into the story of Alan Juniper, a British soldier who deserted twice during WWII. The result: a challenging and, at times, profoundly moving book. - Professor CEcile Fabre, All Souls College, University of Oxford All Soldiers Run Away: Alano's War, the Story of a British Deserter is the tale of Alan Juniper's wartime experiences in the North African and Italian Campaigns in WW2, as well as a wider look at the taboo subject of desertion both then and today. From his first days with the Tower Hamlets Rifles in London to the scorching, unforgiving sands of North Africa, to that first, terrifying battle with Rommel and his Afrika Korps, we follow Alan Juniper through a series of intense and confusing encounters with the enemy and his eventual first desertion, subsequent incarceration, and grasp at a chance for freedom (in exchange for fighting in the Italian Campaign). Alan's story presents a broken man in a broken landscape, struggling on in unbearable circumstances, from the brutality of night fighting in the hills of Perugia to another desertion and a period of unexpected peace in a small Umbrian village, where he is taken in by people who had, only months before, been the enemy. All Soldiers Run Away is the search for Alan's tale in lost battles, missing war diaries, and faded memories. Through his story and contrasting desertions, this text examines why the military and society condemns those who desert, and goes on to explore what duties soldiers have towards one another and their homelands. This story is indeed that of Alano's war, but it is, just as much, the story of deserters in general, presenting a new perspective on that once-shamed act of desertion and asking the readers to come to new understanding of what it is we ask of our men and women in uniform. Andy Owen served in the Intelligence Corps of the British Army, reaching the rank of Captain. He completed operational tours in Northern Ireland, Iraq, and Afghanistan. All Soldiers Run Away is his third book following the novels: East of Coker and Invective.

Frequently Asked Questions About All Soldiers Run Away: Alano's War The Story of a British Deserter

0
|   0  reviews
Did you read All Soldiers Run Away: Alano's War The Story of a British Deserter? Please provide your feedback and rating to help other readers.
Write Review

List of All Editions of All Soldiers Run Away: Alano's War The Story of a British Deserter