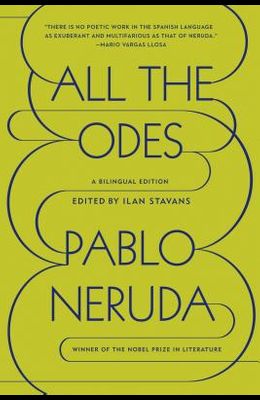 All the Odes: A Bilingual Edition

by
Pablo Neruda and Ilan Stavans

A career-spanning volume charting the Nobel laureate's work in the ode form Pablo Neruda was a master of the ode, which he conceived as an homage to just about everything that surrounded him, from an artichoke to the clouds in the sky, from the moon to his own friendship with Federico Garcia Lorca and his favorite places in Chile. He was in his late forties when he committed himself to writing an ode a week, and in the end he produced a total of 225, which are dispersed throughout his varied oeuvre. This bilingual volume, edited by Ilan Stavans, a distinguished translator and scholar of Latin American literature, gathers all Neruda's odes for the first time in any language. Rendered into English by an assortment of accomplished translators, including Philip Levine, Paul Muldoon, Mark Strand, and Margaret Sayers Peden, collectively they read like the personal diary of a man in search of meaning who sings to life itself, to our connections to one another, and to the place we have in nature and the cosmos. All the Odes is also a lasting statement on the role of poetry as a lightning rod during tumultuous times.