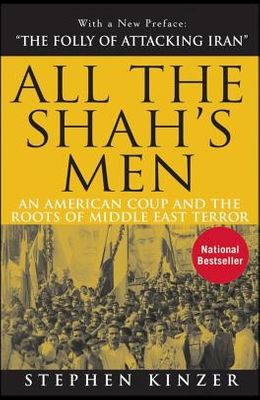 All the Shah's Men: An American Coup and the Roots of Middle East Terror

Brimming with insights into Middle Eastern history and American foreign policy, this book is an eye-opening look at an event whose unintended consequences--Islamic revolution and violent anti-Americanism--have shaped the modern world.

From the Back Cover A very gripping read . . . a cautionary tale for our current leaders. --The New York Times As zealots in Washington intensify their preparations for an American attack on Iran, the story of the CIA's 1953 coup--with its many cautionary lessons--is more urgently relevant than ever. All the Shah's Men brings to life the cloak-and-dagger operation that deposed the only democratic regime Iran ever had. The coup ushered in a quarter-century of repressive rule under the Shah, stimulated the rise of Muslim fundamentalism and anti-Americanism throughout the Middle East, and exposed the folly of using violence to try to reshape Iran. Selected as one of the best books of the year by the Washington Post and the Economist, it's essential reading if you want to place the American attack of Iraq in context--and prepare for what comes next. An entirely engrossing, often riveting, nearly Homeric tale. . . . For anyone with more than a passing interest in how the United States got into such a pickle in the Middle East, All the Shah's Men is as good as Grisham. --The Washington Post Book World An exciting narrative. [Kinzer] questions whether Americans are well served by interventions for regime change abroad, and he reminds us of the long history of Iranian resistance to great power interventions, as well as the unanticipated consequences of intervention. --The Los Angeles Times A swashbuckling yarn [and] helpful reminder of an oft-neglected piece of Middle Eastern history. --The New York Times Book Review