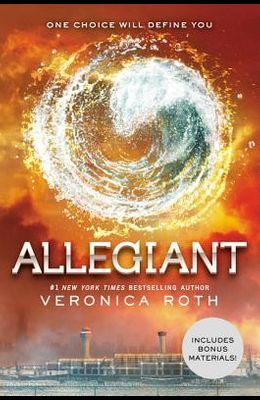 Book #3 in the Divergent Series
by
Veronica Roth

The explosive conclusion to Veronica Roth's #1 New York Times bestselling Divergent trilogy reveals the secrets of the dystopian world that captivated millions of readers and film fans in Divergent and Insurgent . This paperback edition includes bonus content by Veronica Roth One choice will define you. What if your whole world was a lie? What if a single revelation--like a single choice--changed everything? What if love and loyalty made you do things you never expected? Told from a riveting dual perspective, this third installment in the series follows Tris and Tobias as they battle to comprehend the complexities of human nature--and their selves--while facing impossible choices of courage, allegiance, sacrifice, and love. And don't miss The Fates Divide , Veronica Roth's powerful sequel to the bestselling Carve the Mark

From the Back Cover ONE CHOICE CAN TRANSFORM YOU ONE CHOICE CAN DESTROY YOU ONE CHOICE WILL DEFINE YOU #1 New York Times bestselling author Veronica Roth brings her blockbuster divergent series to a powerful conclusion while revealing the secrets of the dystopian world that captivated millions of readers in divergent and insurgent. BONUS MATERIALS INCLUDE: Updated Faction Histories (c) Q&A with Veronica Roth Allegiant Discussion Guide (c) Excerpt from Carve the Mark