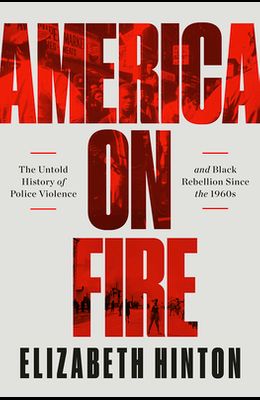 America on Fire: The Untold History of Police Violence and Black Rebellion Since the 1960s

What began in spring 2020 as local protests in response to the killing of George Floyd by Minneapolis police quickly exploded into a massive nationwide movement. Millions of mostly young people defiantly flooded into the nation's streets, demanding an end to police brutality and to the broader, systemic repression of Black people and other people of color. To many observers, the protests appeared to be without precedent in their scale and persistence. Yet, as the acclaimed historian Elizabeth Hinton demonstrates in America on Fire , the events of 2020 had clear precursors--and any attempt to understand our current crisis requires a reckoning with the recent past. Even in the aftermath of Donald Trump, many Americans consider the decades since the civil rights movement in the mid-1960s as a story of progress toward greater inclusiveness and equality. Hinton's sweeping narrative uncovers an altogether different history, taking us on a troubling journey from Detroit in 1967 and Miami in 1980 to Los Angeles in 1992 and beyond to chart the persistence of structural racism and one of its primary consequences, the so-called urban riot. Hinton offers a critical corrective: the word riot was nothing less than a racist trope applied to events that can only be properly understood as rebellions --explosions of collective resistance to an unequal and violent order. As she suggests, if rebellion and the conditions that precipitated it never disappeared, the optimistic story of a post-Jim Crow United States no longer holds. Black rebellion, America on Fire powerfully illustrates, was born in response to poverty and exclusion, but most immediately in reaction to police violence. In 1968, President Lyndon Johnson launched the War on Crime, sending militarized police forces into impoverished Black neighborhoods. Facing increasing surveillance and brutality, residents threw rocks and Molotov cocktails at officers, plundered local businesses, and vandalized exploitative institutions. Hinton draws on exclusive sources to uncover a previously hidden geography of violence in smaller American cities, from York, Pennsylvania, to Cairo, Illinois, to Stockton, California. The central lesson from these eruptions--that police violence invariably leads to community violence--continues to escape policymakers, who respond by further criminalizing entire groups instead of addressing underlying socioeconomic causes. The results are the hugely expanded policing and prison regimes that shape the lives of so many Americans today. Presenting a new framework for understanding our nation's enduring strife, America on Fire is also a warning: rebellions will surely continue unless police are no longer called on to manage the consequences of dismal conditions beyond their control, and until an oppressive system is finally remade on the principles of justice and equality.

From the Back Cover New York Times Book Review - Editors' Choice If you want to understand the massive antiracist protests of 2020, put down the navel-gazing books about racial healing and read America on Fire , Elizabeth Hinton's scintillating account of the urban rebellions that engulfed the country since 1967. Collective political violence erupted everywhere, she argues, from big cities to segregated towns and hamlets, in response to racialized policing, government divestment, and economic violence that locked working-class Black communities in a cycle of poverty, precarity, and premature death. Rebellions ebb and flow but the conditions persist and we continue to reap the consequences. The lessons are clear: changing white hearts or training more cops won't do. To put out the fire this time requires dismantling the entire state and corporate machinery of violence. --Robin D. G. Kelley, author of Freedom Dreams: The Black Radical Imagination and Thelonious Monk: The Life and Times of an American Original In America on Fire , the brilliant political historian Elizabeth Hinton offers an indispensable account of the devastating cycle of police violence and community violence in the United States from the 1960s to the 2020s. With revelatory evidence, Hinton argues that these decades are best understood as an era of near constant Black rebellion, a pattern of politics whose history is essential to any understanding of the state of the nation, and the way from here. --Jill Lepore, best-selling author of These Truths Elizabeth Hinton, our generation's leading historian of the carceral state, uncovers the all-but-forgotten history of police repression, uncivil disobedience, and ignored commission recommendations in the wake of the civil rights and Black Power movements. In a shocking tour of towns in upheaval and cites aflame, this excellent history courageously reveals inconvenient truths about the origins and depths of America's policing and community violence crises. America on Fire unmasks our myths about police reform, black protest, and the 'urban crisis, ' and raises urgent questions about whether the fire this time will be different. --Brandon M. Terry, professor of African and African American studies at Harvard University, and co-editor of To Shape a New World In this powerful, eye-opening book, Elizabeth Hinton reframes our understanding of the origins of the current struggle for racial justice. Focusing on uprisings in small, less well-known cities, she shows how beginning in the 1960s, biased policing sparked violent rejoinders, to which authorities responded with more even repressive policing. She insists that we think of these uprisings not as nihilistic 'riots' but as political rebellions with clear causes and demands. Sadly, lack of substantive progress in addressing the underlying causes has helped produce the crisis we are now experiencing. No book could be more timely. --Eric Foner, Pulitzer Prize-winning author of The Fiery Trial and DeWitt Clinton Professor Emeritus of History at Columbia University In this long overdue, desperately needed, and deeply careful look at the urban violence that erupted across this country during the 1960s and 1970s, Elizabeth Hinton reveals the sobering truth that this nation learned precious little from that period, and has paid a high price indeed for its ignorance. --Heather Ann Thompson, Pulitzer Prize-winning author of Blood in the Water America on Fire is a book about people who get ignored by history, whose anger does not get to be righteous. Revelatory and remarkable, it is a story of how the people after the Civil Rights Movement made known that they had a right to be free. --Reginald Dwayne Betts, author of Felon If the crisis in American justice is ever to be resolved, it is going to take a full-scale reimagining not only of where we are in terms of policing and race but of how we got here. This is a job for historians, and there is no scholar today more insightful about this issue than Elizabeth Hinton. In America on Fire , Hinton shines a new light on the urban mass upheavals of the late 1960s and early 1970s, when the War on Crime was new, and on those that occurred from the 1980s through the early 2000s, when the criminalization of black communities demanded the militarization of the police. Generally known derisively as chaotic, destructive, and community-sabotaging riots, these upheavals in Hinton's account are rebellions?collective action that serves as a purposeful and inevitable response to ongoing daily police violence and brutality against black communities. This book will surely make many policy-makers and readers alike uncomfortable. More importantly, though, Hinton guides us to understand black rebellion as intentional, strategic, and ultimately necessary for progress. --Henry Louis Gates, Jr., author of The Black Church Sweeping in its analysis and searing in its prose, Elizabeth Hinton's brilliant new work is a must read for anyone seeking to understand the history behind the Black Lives Matter movement. As America on Fire makes clear, the urban riots of the last half century were not isolated or irrational incidents, but rather part of a sustained rebellion against systemic racism and structural inequalities, a struggle that continues today. --Kevin M. Kruse, professor of history, Princeton University

Frequently Asked Questions About America on Fire: The Untold History of Police Violence and Black Rebellion Since the 1960s

0
|   0  reviews
Did you read America on Fire: The Untold History of Police Violence and Black Rebellion Since the 1960s? Please provide your feedback and rating to help other readers.
Write Review

List of All Editions of America on Fire: The Untold History of Police Violence and Black Rebellion Since the 1960s