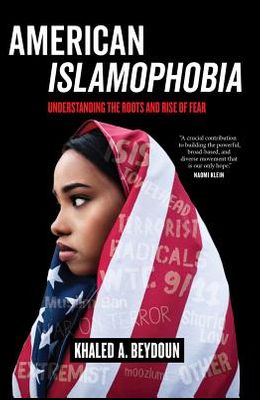 American Islamophobia: Understanding the Roots and Rise of Fear

by
Khaled A Beydoun

I remember the four words that repeatedly scrolled across my mind after the first plane crashed into the World Trade Center in New York City. 'Please don't be Muslims, please don't be Muslims.' The four words I whispered to myself on 9/11 reverberated through the mind of every Muslim American that day and every day after.... Our fear, and the collective breath or brace for the hateful backlash that ensued, symbolize the existential tightrope that defines Muslim American identity today. The term Islamophobia may be fairly new, but irrational fear and hatred of Islam and Muslims is anything but. Though many speak of Islamophobia's roots in racism, have we considered how anti-Muslim rhetoric is rooted in our legal system? Using his unique lens as a critical race theorist and law professor, Khaled A. Beydoun captures the many ways in which law, policy, and official state rhetoric have fueled the frightening resurgence of Islamophobia in the United States. Beydoun charts its long and terrible history, from the plight of enslaved African Muslims in the antebellum South and the laws prohibiting Muslim immigrants from becoming citizens to the ways the war on terror assigns blame for any terrorist act to Islam and the myriad trials Muslim Americans face in the Trump era. He passionately argues that by failing to frame Islamophobia as a system of bigotry endorsed and emboldened by law and carried out by government actors, U.S. society ignores the injury it inflicts on both Muslims and non-Muslims. Through the stories of Muslim Americans who have experienced Islamophobia across various racial, ethnic, and socioeconomic lines, Beydoun shares how U.S. laws shatter lives, whether directly or inadvertently. And with an eye toward benefiting society as a whole, he recommends ways for Muslim Americans and their allies to build coalitions with other groups. Like no book before it, American Islamophobia offers a robust and genuine portrait of Muslim America then and now.

From the front Cover Deftly pairing his deep legal expertise with a searching moral dialogue, Khaled A. Beydoun breaks down U.S. Islamophobia as the full-fledged system that it is--one with a very specific history, but tightly linked to other forms of white supremacy. This book meets the moment, but it is also packed with staying power. A crucial contribution to building the powerful, broad-based, and diverse movement that is our only hope.--Naomi Klein, author of No Is Not Enough and This Changes Everything This compelling book is an exquisite testament to what it means to subvert Islamophobia. Beydoun stands out as a brilliant scholar and advocate who gives voice and attention to the neglected stories of Black Muslims along with the poor, working class, and undocumented.--Kimberlé Williams Crenshaw, Professor of Law, Columbia Law School and UCLA School of Law In this political climate, Beydoun is a much-needed and critical voice, analyst, commentator, and researcher. Unapologetically Muslim and Arab American, he speaks and writes truth to power, steering us away from comfort and forcing us to confront racism through our own relationships with it. Brilliant and witty, he tells it like it is.--Linda Sarsour, cochair of the 2017 Women's March At a time when casual hate-mongering emanates from the highest level of the U.S. government, American Islamophobia provides precisely what is necessary to understand the dark days we are living through. Beydoun brilliantly dissects the tropes that are central to the deliberate construction of Islam as the ultimate hostile other. He draws on his legal training and his experience in national security policing and civil liberties advocacy to draw a stark portrait of this ugly time of carefully curated xenophobia and mass hatred that Muslims, Hispanics, and many others are enduring. I can think of no book that could be more timely.--Rashid Khalidi, author of Brokers of Deceit: How the U.S. Has Undermined Peace in the Middle East A triumphant act of moral restitution. Written with bravura flair, academic authority, and panoramic scholarly panache, American Islamophobia declares the birth of an American Muslim intellectual who wholly claims the land and envisions a bold future for it. This is no simple diagnosis of a racist pathology in a nation. It announces the brave surfacing of a subterranean voice rooted in the moral imaginary of a liberated America.--Hamid Dabashi, author of Iran Without Borders: Towards a Critique of the Postcolonial Nation This is an urgent book for anyone seeking a comprehensive understanding of Islamophobia today.--Evelyn Alsultany, author of Arabs and Muslims in the Media: Race and Representation after 9/11 This is a highly readable, deeply personal, and fiercely intellectual analysis of endemic social and structural Islamophobia throughout American history. This book is required reading for any thinking human being.--Khaled Abou El Fadl, Omar and Azmeralda Alfi Professor of Law, UCLA School of Law Political commentary, intellectual history, legal exegesis, and autobiography, this book is a powerful and moving articulation of how Islamophobia has shaped and been shaped by U.S. democracy.--Devon W. Carbado, coauthor of Acting White? Rethinking Race in Post-Racial America and Harry Pregerson Professor of Law, UCLA School of Law