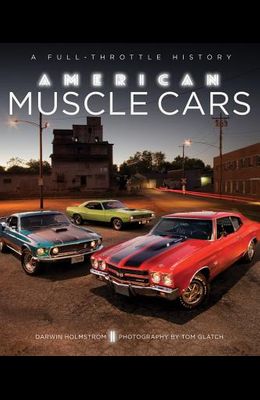 This is the muscle car history to own--a richly illustrated chronicle of America's greatest high-performance cars, told from their 1960s beginning through the present day In the 1960s, three incendiary ingredients--developing V-8 engine technology , a culture consumed by the need for speed , and 75 million baby boomers entering the auto market--exploded in the form of the factory muscle car. The resulting vehicles, brutal machines unlike any the world had seen before or will ever see again, defined the sex, drugs, and rock 'n' roll generation . American Muscle Cars chronicles this tumultuous period of American history through the primary tool Americans use to define themselves: their automobiles. From the street-racing hot rod culture that emerged following World War II through the new breed of muscle cars still emerging from Detroit today, this book brings to life the history of the American muscle car. When Pontiac's chief engineer, John Z. DeLorean , and his team installed a big-inch engine into the division's intermediate chassis, they immediately invented the classic muscle car. In those 20 minutes it took Bill Collins and Russ Gee to bolt a 389 ci V-8 engine into a Tempest chassis they created the prototype for Pontiac's GTO --and changed the course of automotive history. From that moment on, American performance cars would never be the same. Featured cars represent all American automakers of the time-- Chrysler , Ford , General Motors , and AMC --as well as landmark models like the Challenger , Charger , Road Runner , Super Bee , Super Bird , 'Cuda , Camaro , Chevelle SS , 442 , Boss Mustang , GTX , Javelin , AMX , and much more. American Muscle Cars tells the story of the most desirable cars ever to come out of Detroit. It's a story of flat-out insanity told at full throttle and illustrated with beautiful photography.

List of All Editions of American Muscle Cars: A Full-Throttle History