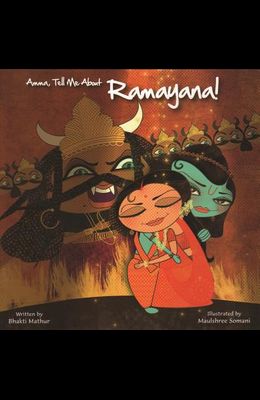 Amma, Tell Me about Ramayana!

Part of the Amma Tell Me Series
by
Bhakti Mathur

The story of Rama, the righteous prince, Written ages ago by the poet Valmiki. This is Ramayana - an ancient, epic poem, As told by Amma to Klaka and Kiki. Beloved prince of Ayodhya, next in line to be king; Banished to the forest at his stepmother's behest. Waged a war with the demon Ravana to rescue his wife Helped by an army of monkeys in his quest. -Amme Tell Me- is a charming and informative series of children's books that introduces the major Hindu festivals and figures to young readers, and are perfect for families wanting to share stories of Hinduism with their children or for educators looking for resource on the Hindu culture for their students. Written in rhyme with vivid, captivating illustrations, this series brings Hindu mythology to its readers in a fun and non-preachy way. The Series has ten books on the festivals of Holi, Diwali, and on the Hindu gods Krishna, Hanuman and Ganesha.

Amma Tell Me Series In Order - By Bhakti Mathur