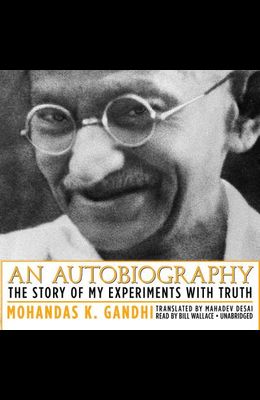 An Autobiography: The Story of My Experiments with Truth

by
Mohandas Gandhi and Mahadev Desai and Carol Wallace

A holy man to Hindus, a hero to Muslims, and a criminal to the British, Mohandas K. Gandhi was one of the most influential and inspiring figures of the twentieth century, a man whose quest to live in accord with God's highest truth led him to initiate massive campaigns against racism, violence, and colonialism. From his youthful rebellion against vegetarianism, to his successful law practice in South Africa, his struggle with his own sexual excesses, and his leadership of the movement to free India from British rule, Gandhi describes the story of his life as a series of spiritual experiments and explains how he developed his concept of active nonviolent resistance, which propelled the Indian struggle for independence and inspired countless other nonviolent struggles. In 1999, this book was designated as one of the 100 Most Important Spiritual Books of the 20th Century by HarperCollins publishers.