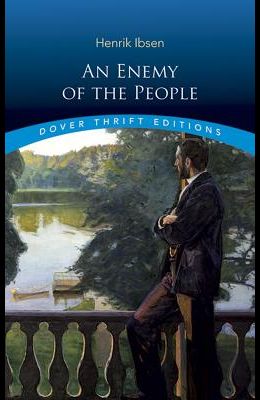 An Enemy of the People

Widely regarded as one of the foremost dramatists of the nineteenth century, Norwegian playwright Henrik Ibsen (1828-1906) brought the social problems and ideas of his day to center stage. Creating realistic plays of psychological conflict that emphasized character over cunning plots, he frequently inspired critical objections because his dramas deemed the individual more important than the group. In this powerful work, Ibsen places his main characters, Dr. Thomas Stockman, in the role of an enlightened and persecuted minority of one confronting an ignorant, powerful majority. When the physician learns that the famous and financially successful baths in his hometown are contaminated, he insists they be shut down for expensive repairs. For his honesty, he is persecuted, ridiculed, and declared an enemy of the people by the townspeople, included some who have been his closest allies. First staged in 1883, An Enemy of the People remains one of the most frequently performed plays by a writer considered by many the father of modern drama. This easily affordable edition makes available to students, teachers, and general readers a major work by one of the world's great playwrights.

Books similiar to An Enemy of the People

List of All Editions of An Enemy of the People