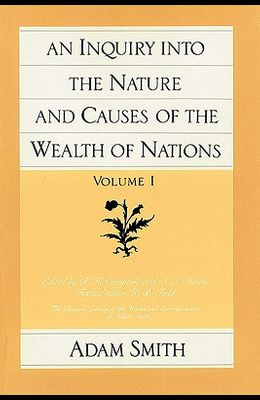 An Inquiry Into the Nature and Causes of the Wealth of Nations (Vol. 1)

Part of the The Glasgow Edition of the Works and Correspondence of Adam Smith Series
by
Adam Smith and R H Campbell
$10.49
Select Format

First published in 1776, the year in which the American Revolution officially began, Smith's Wealth of Nations sparked a revolution of its own. In it Smith analyzes the major elements of political economy, from market pricing and the division of labor to monetary, tax, trade, and other government policies that affect economic behavior. Throughout he offers seminal arguments for free trade, free markets, and limited government. Criticizing mercantilists who sought to use the state to increase their nations' supply of precious metals, Smith points out that a nation's wealth should be measured by the well-being of its people. Prosperity in turn requires voluntary exchange of goods in a peaceful, well-ordered market. How to establish and maintain such markets? For Smith the answer lay in man's social instincts, which government may encourage by upholding social standards of decency, honesty, and virtue, but which government undermines when it unduly interferes with the intrinsically private functions of production and exchange.

Books similiar to An Inquiry Into the Nature and Causes of the Wealth of Nations (Vol. 1)

List of All Editions of An Inquiry Into the Nature and Causes of the Wealth of Nations (Vol. 1)