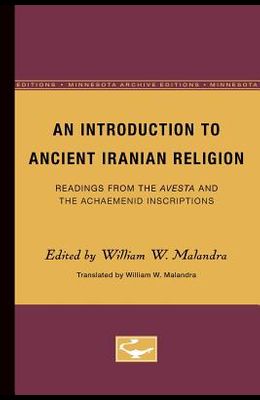 An Introduction to Ancient Iranian Religion: Readings from the Avesta and the Achaemenid Inscriptions

An Introduction to Ancient Iranian Religion was first published in 1983. Minnesota Archive Editions uses digital technology to make long-unavailable books once again accessible, and are published unaltered from the original University of Minnesota Press editions. When Persia fell to Islam in the mid-seventh century, the ancient Iranian religion of Zoroastrianism all but disappeared (although it is still practiced by small groups in India and Iran). As one of the dominant religions of antiquity, it influenced the Judeo- Christian tradition as well as some forms of gnosticism. Despite its age and venerable place in the history of world religions, Zoroastrianism remains little known outside of a few philologists and historians of religion. Because of the difficulty of translation, there is little primary textual material available for nonspecialists; the few translations that do exist are quite old. In An Introduction to Ancient Iranian Religion , William Malandra provides not only modern English translations of the sacred texts but also a comprehensive introduction to the subject of Zoroastrianism itself. In an introductory essay Malandra outlines the main features of Zoroastrianism in its historical, cultural, and spiritual setting. His new translations of readings from the Avesta, the sacred book of Zoroastrianism, and selections from the Achaemenid inscriptions of the great kings Darius and Xerxes are accompanied by interpretive notes that allow students to make their way through this difficult material. This book is, therefore, not just a collection of texts but a selfcontained introduction to Zoroastrianism that can be used by the nonspecialist without recourse to additional interpretive works.

From the Back Cover Minnesota Archive Editions uses digital technology to make long-unavailable books once again accessible to scholars, students, researchers, and general readers. Rich with historical and cultural value, these works are published unaltered from the original University of Minnesota Press editions. The books offered through Minnesota Archive Editions are produced in limited quantities according to customer demand and are available through select distribution partners.