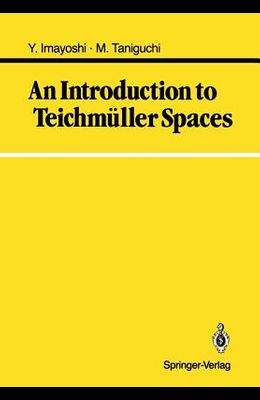 An Introduction to Teichmüller Spaces

by
Yoichi Imayoshi and Masahiko Taniguchi

This is the English translation of our introductory book on Teichmiiller space written in Japanese. We have taken advantage of the opportunity afforded by this translation to correct some minor errors in the original text, and to include several new related topics as additional sections or subsections. Among other things, we add the construction of Thurston's compactification of the Teichmiiller space in 4 of Chapter 3, and the Thurston and Bers theory on the classification of Teichmiiller modular transformations in 5 of Chapter 6. We also include a sketch of the proof of celebrated theorems of Royden ( 4 of Chapter 6), connection between Teichmiiller theory and deformation theory of the complex structures of Riemann surfaces due to Kodaira and Spencer ( 2.4 of Chapter 7), and a derivation of negativity of curvatures of the Teichmiiller space with respect to the Weil-Petersson metric ( 3.4 of Chapter 7). Further, we indicate how to verify that the compactified moduli space of a compact Riemann surface, constructed in Appendix B, is actually compact. We include several new references chiefly related to added parts. Other than these, the main body of the text is unchanged. Professors Tadashi Kuroda and Kotaro Oikawa kindly read the manuscript of the English edition and gave much valuable advice. We also record our gratitude to all friends and colleagues, especially Sadayoshi Kojima, Makoto Masumoto, Toshiyuki Sugawa, and Harumi Tanigawa, who rendered us much help by reading various parts of the manuscript.