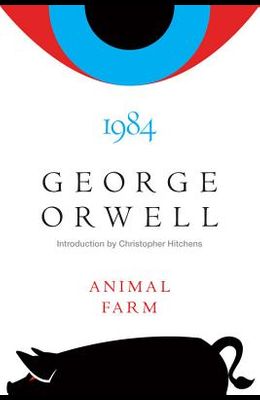 by
George Orwell and A M Heath Heath and Christopher Hitchens
$25.00
Select Format

Orwell's classic satire of the Russian Revolution, the account of the struggle initiated by the animals that transforms Mr. Jones's Manor Farm into Animal Farm, is paired with 1984, a succinct, frightening tale that has remained a potent reminder of the fate of those who suffer under totalitarian regimes.

From the Back Cover The two novels that you now hold in your hands have become 'modern classics'. . . taught in many schools as examples of moral weight and political prescience . . . read for pleasure, excitement and instruction. -- from the Introduction by Christopher Hitchens PRAISE FOR ANIMAL FARM A wise, compassionate, and illuminating fable. -- The New York Times Absolutely first-rate . . . comparable to Voltaire and Swift. -- The New Yorker There are no replacements for a George Orwell, just as there are no replacements for a Bernard Shaw or a Mark Twain. . . . he pricked, provoked and badgered lazy minds, delighted those who enjoyed watching an orginal intelligence at work. -- Time PRAISE FOR 1984 1984 is a profound, terrifying, and wholly fascinating book. It is a fantasy of the political future, and like any such fantasy, serves its author as a magnifying device for an examination of the present. -- Lionel Trilling 1949 The most solid, the most brilliant, thing George Orwell has done. -- V.S. Pritchett
From the front Cover ALL ANIMALS ARE EQUAL BUT SOME ANIMALS ARE MORE EQUAL THAN OTHERS George Orwell's classic satire of the Russian Revolution is the account of the bold struggle, initiated by the animals, that transforms Mr. Jones's Manor Farm into Animal Farm--a wholly democratic society built on the credo that All Animals Are Created Equal. Out of their cleverness, the pigs Napoleon, Squealer, and Snowball emerge as leaders of the new community in a subtle evolution that proves disastrous. The climax is the brutal betrayal of the faithful horse Boxer, when totalitarian rule is re-established with the bloodstained postscript to the founding slogan: But Some Animals Are More Equal Than Others. WAR IS PEACE. FREEDOM IS SLAVERY. IGNORANCE IS STRENGTH. In 1984, London is a grim city where Big Brother is always watching you and the Thought Police can practically read your mind. Winston is a man in grave danger for the simple reason that his memory still functions. Drawn into a forbidden love affair, Winston finds the courage to join a secret revolutionary organization called The Brotherhood, dedicated to the destruction of the Party. Together with his beloved Julia, he hazards his life in a deadly match against the powers that be.