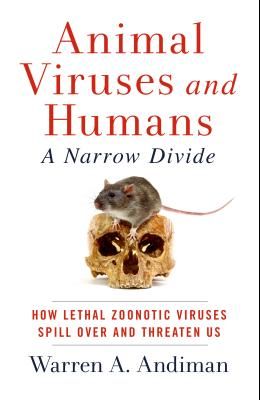 Animal Viruses and Humans, a Narrow Divide: How Lethal Zoonotic Viruses Spill Over and Threaten Us

by
Warren A Andiman
$10.67
Select Format

To reproduce promiscuously and to wreak havoc wherever they can find a home, this is the sole raison d' tre of viruses writes Dr. Warren Andiman, an HIV/AIDS researcher who has been on the front lines battling infectious diseases for over forty years. In Animal Viruses and Humans, A Narrow Divide , Dr. Andiman introduces readers to the ominous world of zoonotic viruses, those deadly microbes that sometimes spread directly from animals to humans. Andiman traces the history of eight deadly zoonoses as they make the leap to human populations: Middle East Respiratory Syndrome (MERS), Swine influenza, Hantavirus, Monkeypox, Severe Acute Respiratory Syndrome (SARS), Rabies, Ebola, and Henipaviruses (Nipah and Hendra). Through these examples he describes the fundamental characteristics of zoonotic viruses: what they look like, where they come from, how they invade so efficiently, and when and why they infect human populations. He also illustrates the labor intensive and fascinating detective work that infectious disease specialists must do to uncover the source of an outbreak. In these essays, Andiman looks to the future, making reference to the worrisome effects on zoonoses of climate change, microenvironmental damage, population shifts, and globalization. He describes some current trends in vaccine and antiviral drug development, and introduces organizations like the European Center for Disease Prevention and Control, the EcoHealth Alliance, and the National Academy of Medicine Commission on Global Risk Framework for the Future, all of which are tasked with anticipating future zoonoses. Andiman reveals the most important steps that we can, and must , take to stem the spread of animal viruses, explaining, The zoonoses I've chosen to write about . . . are meant to describe only a small sample of what is already out there but, more menacingly, what is inevitably on its way, in forms we can only imagine. Warren Andiman, MD is Professor emeritus of pediatrics and epidemiology at the Yale Schools of Medicine and Public Health.

Frequently Asked Questions About Animal Viruses and Humans, a Narrow Divide: How Lethal Zoonotic Viruses Spill Over and Threaten Us

Books like Animal Viruses and Humans, a Narrow Divide: How Lethal Zoonotic Viruses Spill Over and Threaten Us

List of All Editions of Animal Viruses and Humans, a Narrow Divide: How Lethal Zoonotic Viruses Spill Over and Threaten Us