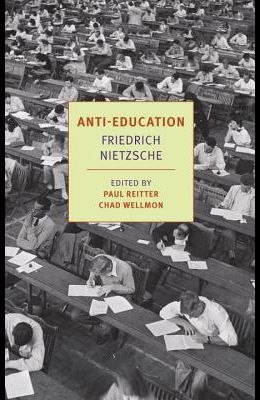 Anti-Education: On the Future of Our Educational Institutions

by
Friedrich Wilhelm Nietzsche and Damion Searls and Paul Reitter

AN NYRB Classics Original In 1869, at the age of twenty-four, the precociously brilliant Friedrich Nietzsche was appointed to a professorship of classical philology at the University of Basel. He seemed marked for a successful and conventional academic career. Then the philosophy of Schopenhauer and the music of Wagner transformed his ambitions. The genius of such thinkers and makers--the kind of genius that had emerged in ancient Greece--this alone was the touchstone for true understanding. But how was education to serve genius, especially in a modern society marked more and more by an unholy alliance between academic specialization, mass-market journalism, and the militarized state? Something more than sturdy scholarship was called for. A new way of teaching and questioning, a new philosophy . . . What that new way might be was the question Nietzsche broached in five vivid, popular public lectures in Basel in 1872. Anti-Education presents a provocative and timely reckoning with what remains one of the central challenges of the modern world.