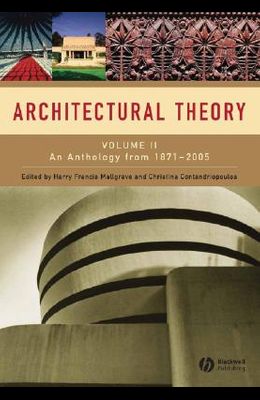 This second volume of the landmark Architectural Theory anthology surveys the development of architectural theory from the Franco-Prussian war of 1871 until the end of the twentieth century. The entire two volume anthology follows the full range of architectural literature from classical times to present transformations. An ambitious anthology bringing together over 300 classic and contemporary essays that survey the key developments and trends in architecture Spans the period from 1871 to 2005, from John Ruskin and the arts and crafts movement in Great Britain through to the development of Lingang New City, and the creation of a metropolis in the East China sea Organized thematically, featuring general and section introductions and headnotes to each essay written by a renowned expert on architectural theory Places the work of starchitects like Koolhaas, Eisenman, and Lyn alongside the work of prominent architectural critics, offering a balanced perspective on current debates Includes many hard-to-find texts and works never previously translated into English Alongside Volume I: An Anthology from Vitruvius to 1870 , creates a stunning overview of architectural theory from early antiquity to the twenty-first century

From the Back Cover This second volume of the landmark Architectural Theory anthology surveys the development of architectural theory from the Franco-Prussian war of 1871 until the end of the twentieth century. Together with volume I, it is the first anthology to follow the full range of architectural literature from its beginnings in classical times to its impact today. Drawing on diverse international texts, this book explores various reform movements in Europe and North America, including Arts & Crafts; spans the technological and conceptual innovations of the late-nineteenth century in connection with the rise and development of modern theory; and reviews early critiques of modernism, the post-modern discussions of the 1970s, and post-structural and regionalist thought in the 1980s. The editors also consider the counter-movements of the 1990s - inspired by the digital revolution, technological innovations, and growing concerns for sustainable design. This anthology maps a wide array of debates in architectural history, placing the writings of starchitects like Koolhaas, Eisenman, and Lynn alongside the work of prominent architectural critics. It also sheds new historical perspective on topics such as ecology and sustainability, as well as CAD and blobs. The result is an inspiring and comprehensive resource for those studying or working in architectural theory and art history.

Books like Architectural Theory: Volume II - An Anthology from 1871 to 2005

List of All Editions of Architectural Theory: Volume II - An Anthology from 1871 to 2005