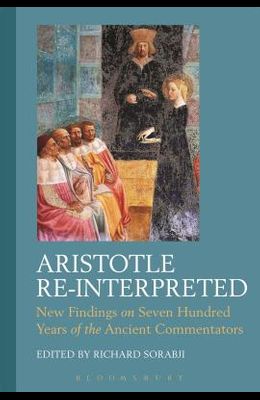 This volume presents collected essays - some brand new, some republished, and others newly translated - on the ancient commentators on Aristotle and showcases the leading research of the last three decades. Through the work and scholarship inspired by Richard Sorabji in his series of translations of the commentators started in the 1980s, these ancient texts have become a key field within ancient philosophy. Building on the strength of the series, which has been hailed as 'a scholarly marvel', 'a truly breath-taking achievement' and 'one of the great scholarly achievements of our time' and on the widely praised edited volume brought out in 1990 ( Aristotle Transformed ) this new book brings together critical new scholarship that is a must-read for any scholar in the field. With a wide range of contributors from across the globe, the articles look at the commentators themselves, discussing problems of analysis and interpretation that have arisen through close study of the texts. Richard Sorabji introduces the volume and himself contributes two new papers. A key recent area of research has been into the Arabic, Latin and Hebrew versions of texts, and several important essays look in depth at these. With all text translated and transliterated, the volume is accessible to readers without specialist knowledge of Greek or other languages, and should reach a wide audience across the disciplines of Philosophy, Classics and the study of ancient texts.