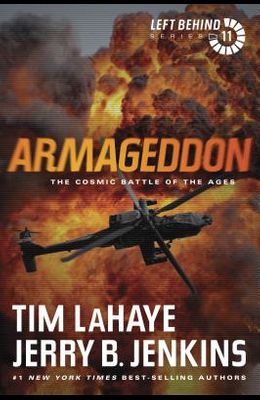 Armageddon: The Cosmic Battle of the Ages

Book #11 in the Left Behind Series
by
Tim LaHaye

From the Back Cover Execution of Carpathia opponents scheduled. Tribulation Force operative among the condemned. GC military surrounds Petra; millions face extermination. A supernatural darkness has engulfed the Middle East. Millions of Christ-followers huddle in the red rock city of Petra and in pockets around the globe, threatened with execution for refusing the loyalty mark of Antichrist Nicolae Carpathia. The Tribulation Force, hunted as subversives and working against the forces of evil, race against time as Carpathia amasses the most powerful army in history. As the world hovers near destruction, the faithful scan the skies for any sign of their last and greatest hope--the Messiah. Armageddon is #11 in the phenomenal New York Times best-selling Left Behind series that rocked the publishing world and made millions think seriously about the future and their places in it. With special features relating to current events and end-times prophecy.