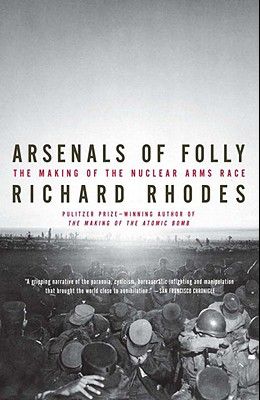 Arsenals of Folly: The Making of the Nuclear Arms Race

Pulitzer Prize-winning author Richard Rhodes delivers a riveting account of the nuclear arms race and the Cold War. In the Reagan-Gorbachev era, the United States and the Soviet Union came within minutes of nuclear war, until Gorbachev boldly launched a campaign to eliminate nuclear weapons, setting the stage for the 1986 Reykjavik summit and the incredible events that followed. In this thrilling, authoritative narrative, Richard Rhodes draws on personal interviews with both Soviet and U.S. participants and a wealth of new documentation to unravel the compelling, shocking story behind this monumental time in human history--its beginnings, its nearly chilling consequences, and its effects on global politics today.