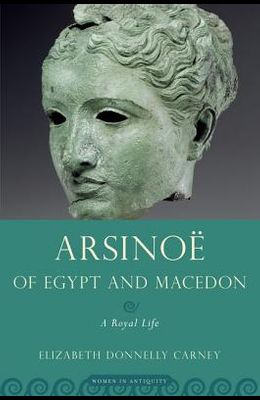 Arsinoe of Egypt and Macedon: A Royal Life

Part of the Women in Antiquity Series
by
Elizabeth Donnelly Carney

The life of Arsinoe II (c. 316-c.270 BCE), daughter of the founder of the Ptolemaic dynasty, is characterized by dynastic intrigue. Her marriage to her full brother Ptolemy II, king of Egypt, was the first of the sibling marriages that became a dynastic feature of the Ptolemies. With Ptolemy II, she ended her days in great wealth and power. However, prior to that point she was forced to endure two tumultuous marriages, both of which led her to flee for her life. Arsinoe was the model for the powerful role Ptolemaic women gradually acquired as co-rulers of their empire, and her image continued to play a role in dynastic solidarity for centuries to come. Although Arsinoe was the pivotal figure in the eventual evolution of regnal power for Ptolemaic women--and despite a considerable body of recent scholarship across many fields relevant to her life--there has been no up-to-date biography in English of her life. Elizabeth Donnelly Carney, in sifting through the available archaeological and literary evidence, offers here an accessible and reasoned portrait. In describing Arsinoe's significant role in the courts of Thrace and Alexandria, Carney weaves discussions of earlier Macedonian royal women, the institution of sibling marriage, and the reasons for its longstanding success in Hellenistic Egypt, ultimately providing an expansive view of this integral Hellenistic figure.

Women in Antiquity Series In Order - By Elizabeth Donnelly Carney