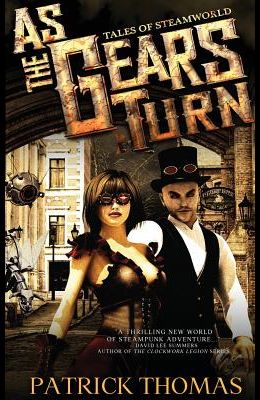 As the Gears Turn: Tales from Steamworld

Even Aliens Love Steampunk... Which is why the Aloff created Steamworld. Those born on the playworld go about their lives not realizing they are camera fodder for the Bugeyes. But there are those who were kidnapped from Earth, those who know, those who try to make Steamworld a better place: Lady Thistle and Sir Bult - Steam Table Knights who are charged with solving a string of bank robberies where one of the criminals is a mechanical dragon. Lil Repute - former lady of the evening turned adventurer working to solve the disappearance of three streetcorner girls not important enough for the authorities to search for. Colonel Reginald Windglass and the Skyrovers - retired general and former commander of the Albion Empire's military forces, leads a group of irregulars against slaver sky pirates. And last, but certainly not least, especially in his own mind - Jackson Grimstone, the Spellpunk - On Earth, Grimstone had been a school teacher. The aloff forcibly separated him from his daughter. To try and get her back, he has become the greatest rogue the city of Thames has ever seen. If a would-be Jack the Ripper, a murderous voodoo practitioner, or a war between the Sisters of the Order of the Red Hood and a race of manwolves need stopping, there is nobody better for the job than the Spellpunk. Red Riding Hoods on steam cycles hunting wolfmen Mechanical dragons robbing banks Mad scientists stitching bodies together Patrick Thomas takes you to a thrilling new world of steampunk adventure in these six must-read retro-futuristic tales. -David Lee Summers, author of the Clockwork Legion series. Well-told tale in an interesting world. - Sam Tomaino, SFRevu