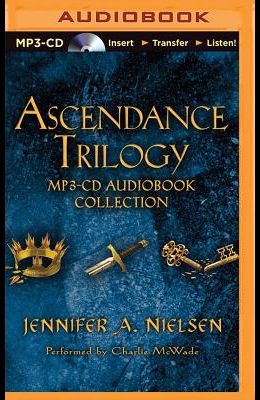 Book #1-3 in the The Ascendance Series
by
Jennifer A Nielsen and Charlie McWade
$49.99
Select Format

The False Prince Four boys. One treacherous plan. An entire kingdom to fool. In a faraway land, civil war is brewing. To unify his kingdom's divided people, a nobleman named Conner devises a cunning plan to find an impersonator of the king's long-lost son and install him on the throne. Four orphans are forced to compete for the role, including a defiant and clever boy named Sage. Sage knows that Conner's motives are more than questionable, yet his life balances on a sword's point--he must be chosen to play the prince or he will certainly be killed. His rivals will be devising their own plots as well, so Sage must trust no one and keep his thoughts hidden. As Sage moves from a rundown orphanage to Conner's sumptuous palace, layer upon layer of deceit unfolds, until finally, a truth is revealed that may very well prove more dangerous than all of the lies taken together. The Runaway King A kingdom teetering on the brink of destruction. A king gone missing. Who will survive?Just weeks after Jaron has taken the throne, an assassination attempt forces him into a deadly situation. Rumors of a coming war are winding their way between the castle walls, and Jaron feels the pressure quietly mounting within Carthya. Soon, it becomes clear that deserting the kingdom may be his only hope of saving it. But the further Jaron is forced to run from his identity, the more he wonders if it is possible to go too far. Will he ever be able to return home again? Or will he have to sacrifice his own life in order to save his kingdom? The stunning second installment of The Ascendance Trilogy takes listeners on a roller coaster ride of treason and murder, thrills and peril, as they journey with the Runaway King. The Shadow Throne Jennifer A. Nielsen takes listeners on an extraordinary journey in this final installment of the New York Times and USA Today bestselling Ascendance Trilogy. War has come to Carthya. It knocks at every door and window in the land. And when Jaron learns that King Vargan of Avenia has kidnapped Imogen in a plot to bring Carthya to its knees, Jaron knows it is up to him to embark on a daring rescue mission. But everything that can go wrong does. His friends are flung far and wide across Carthya and its neighboring lands. In a last-ditch effort to stave off what looks to be a devastating loss for the kingdom, Jaron undertakes what may be his last journey to save everything and everyone he loves. But even with his lightning-quick wit, Jaron cannot forestall the terrible danger that descends on him and his country. Along the way, will he lose what matters most? And in the end, who will sit on Carthya's throne?

The Ascendance Series In Order - By Jennifer A Nielsen

Books like Ascendance Trilogy: The False Prince, the Runaway King, the Shadow Throne

List of All Editions of Ascendance Trilogy: The False Prince, the Runaway King, the Shadow Throne