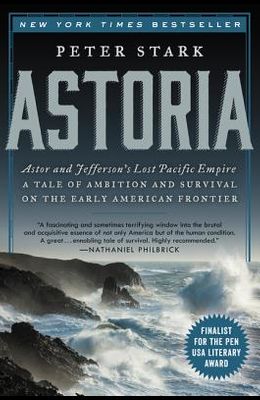 Astoria: Astor and Jefferson's Lost Pacific Empire: A Tale of Ambition and Survival on the Early American Frontier

In the tradition of The Lost City of Z and Skeletons in the Zahara , Astoria is the thrilling, true-adventure tale of the 1810 Astor Expedition, an epic, now forgotten, three-year journey to forge an American empire on the Pacific Coast. Peter Stark offers a harrowing saga in which a band of explorers battled nature, starvation, and madness to establish the first American settlement in the Pacific Northwest and opened up what would become the Oregon trail, permanently altering the nation's landscape and its global standing. Six years after Lewis and Clark's began their journey to the Pacific Northwest, two of the Eastern establishment's leading figures, John Jacob Astor and Thomas Jefferson, turned their sights to founding a colony akin to Jamestown on the West Coast and transforming the nation into a Pacific trading power. Author and correspondent for Outside magazine Peter Stark recreates this pivotal moment in American history for the first time for modern readers, drawing on original source material to tell the amazing true story of the Astor Expedition. Unfolding over the course of three years, from 1810 to 1813, Astoria is a tale of high adventure and incredible hardship in the wilderness and at sea. Of the more than one hundred-forty members of the two advance parties that reached the West Coast--one crossing the Rockies, the other rounding Cape Horn--nearly half perished by violence. Others went mad. Within one year, the expedition successfully established Fort Astoria, a trading post on the Columbia River. Though the colony would be short-lived, it opened provincial American eyes to the potential of the Western coast and its founders helped blaze the Oregon Trail.

From the Back Cover In 1810, John Jacob Astor sent out two advance parties to settle the wild, unclaimed western coast of North America. More than half of his men died violent deaths. The others survived starvation, madness, and greed to shape the destiny of a continent. Unfolding from 1810 to 1813, Astoria is a tale of high adventure and incredible hardship drawing extensively on firsthand accounts of the men who made the journey. Though Astoria, the colony itself, would be short-lived, its founders opened provincial American eyes to the remarkable potential of the Western coast, discovered the route that became the Oregon Trail, and permanently altered the nation's landscape and global standing.