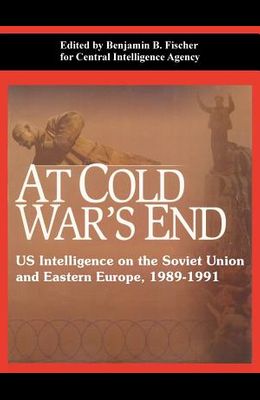 At Cold War's End: US Intelligence on the Soviet Union and Eastern Europe, 1989-1991

by
Central I Agency and Benjamin B Fischer
$31.86
Select Format

The Center for the Study of Intelligence (CSI) of the Central Intelligence Agency and the George W. Bush Center for Presidential Studies at Texas A&M University co-sponsored a conference on US Intelligence and the End of the Cold War on the Texas A&M University campus at College Station from 18 to 20 November 1999. As a contribution to the conference, CSI prepared a compendium of newly declassified US intelligence documents covering the years 1989-1991. This period encompassed events in the USSR and Eastern Europe that transformed the postwar world and much of the 20th century's geopolitical landscape. It was a time when the tempo of history accelerated so rapidly that, as one historian put it, events seemed to be moving beyond human control, if not human comprehension. Benjamin B. Fischer of CIA's History Staff selected, edited, and wrote the preface to the National Intelligence Estimates and other intelligence assessments included in this companion volume. In conjunction with the conference, the Intelligence Community will release to the National Archives and Records Administration (NARA) the records reprinted in this compendium and those listed in the Appendix. The declassification and release of these documents marks a new stage in the CIA's commitment to openness. The Agency has only rarely declassified and made available to the public and to scholars Cold War records of such recent vintage. The new release complements and supplements the previous declassification of more than 550 National Intelligence Estimates (NIEs) and Special National Intelligence Estimates (SNIEs) on the Soviet Union and Eastern Europe from 1946 to 1985. CIA continues to review and declassify finishedintelligence on these countries. These records are available at NARA's Archives II facility in College Park, Maryland, in Records Group 263 (Central Intelligence Agency Records). Two of the documents reprinted in this volume originated with CIA's Office of Soviet Analysis (SOVA). Both have been cited in accounts of US-Soviet relations during the Bush administration and have been discussed elsewhere. The complete texts appear here for the first time. Mr. Fischer tried to identify and release the most important analysis available for this period. His selection is comprehensive. Some of the documents, especially those on military-strategic subjects, were only partially declassified, since they contain data from still-sensitive sources and methods. Readers should understand, however, that even the portions reprinted here contain information that until recently was highly classified. We want to note, in addition, that we have selected only estimates and assessments prepared during the Bush administration. We realize that, in some cases, estimates and other forms of finished intelligence issued before 1989 may have addressed some of the same issues and even reached some of the same conclusions as those that came later, but our focus is exclusively on what was written during 1989-1991. Mr. Fischer and I would like to thank all those responsible for making this compendium and the conference possible. Above all, we would like to thank former President George Bush and his staff for enthusiastically endorsing the conference and Director of Central Intelligence George J. Tenet for his support and cooperation. We also would like to thank CIA's Executive Director, David W. Carey, for his assistancein releasing the documents. Closer to home, we want to thank CIA's Office of Information Management, headed by Edmund Cohen, and in particular James Oliver, chief of the Historical Review Program, Howard Stoertz, John Vogel, and James Noren. We also would like to thank readers who took the time to examine this volume in draft and to make comments, and Michael Warner, Deputy Chief of the History Staff, who worked closely with us on this project. Gerald K. Haines Chief Historian September 1999

Frequently Asked Questions About At Cold War's End: US Intelligence on the Soviet Union and Eastern Europe, 1989-1991

0
|   0  reviews
Did you read At Cold War's End: US Intelligence on the Soviet Union and Eastern Europe, 1989-1991? Please provide your feedback and rating to help other readers.
Write Review

List of All Editions of At Cold War's End: US Intelligence on the Soviet Union and Eastern Europe, 1989-1991