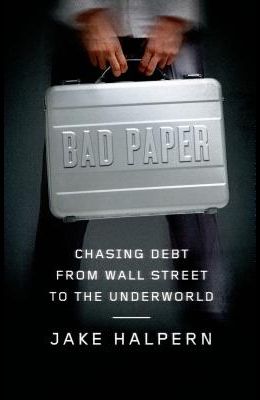 Bad Paper: Chasing Debt from Wall Street to the Underworld

The Federal Trade Commission receives more complaints about rogue debt collecting than about any activity besides identity theft. Dramatically and entertainingly, Bad Paper reveals why. It tells the story of Aaron Siegel, a former banking executive, and Brandon Wilson, a former armed robber, who become partners and go in quest of paper--the uncollected debts that are sold off by banks for pennies on the dollar. As Aaron and Brandon learn, the world of consumer debt collection is an unregulated shadowland where operators often make unwarranted threats and even collect debts that are not theirs. Introducing an unforgettable cast of strivers and rogues, Jake Halpern chronicles their lives as they manage high-pressure call centers, hunt for paper in Las Vegas casinos, and meet in parked cars to sell the social security numbers and account information of unsuspecting consumers. He also tracks a package of debt that is stolen by unscrupulous collectors, leading to a dramatic showdown with guns in a Buffalo corner store. Along the way, he reveals the human cost of a system that compounds the troubles of hardworking Americans and permits banks to ignore their former customers. The result is a vital expos that is also a bravura feat of storytelling.