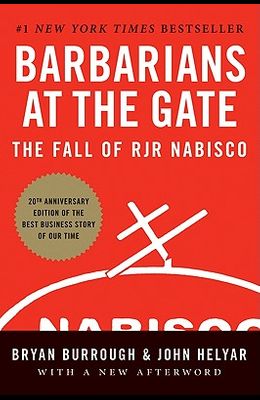 Barbarians at the Gate: The Fall of RJR Nabisco

by
Bryan Burrough and John Helyar

Barbarians at the Gate is the classic account of the defining takeover in Wall Street merger history. The authors' gripping record of the frenzy that overtook Wall Street, in fall of 1988, gives a richly textured social history of wealth at the twilight of the Reagan era.

From the Back Cover The fight to control RJR Nabisco during October and November of 1988 was more than just the largest takeover in Wall Street history. Marked by brazen displays of ego not seen in American business for decades, it became the high point of a new gilded age, and its repercussions are still being felt. The ultimate story of greed and glory, Barbarians at the Gate is the gripping account of these two frenzied months, of deal makers and publicity flaks, of an old-line industrial powerhouse that became the victim of the ruthless and rapacious style of finance in the 1980s. Written with the bravado of a novel and researched with the diligence of a sweeping cultural history, here is the unforgettable story of the takeover in all its brutality.