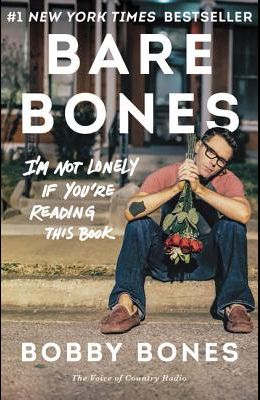 Bare Bones: I'm Not Lonely If You're Reading This Book

#1 New York Times Bestseller A touching, funny, heart-wrenching, and triumphant memoir from one of the biggest names in radio, the host of The Bobby Bones Show , one of the most listened-to drive time morning radio shows in the nation. Growing up poor in Mountain Pine, Arkansas, with a young, addicted mom, Bobby Estell fell in love with country music. Abandoned by his father at the age of five, Bobby saw the radio as his way out--a dream that came true in college when he went on air at the Henderson State University campus station broadcasting as Bobby Bones, while simultaneously starting The Bobby Bones Show at 105.9 KLAZ. Bobby's passions were pop, country music, and comedy, and he blended the three to become a tastemaker in the country music industry, heard by millions daily. Bobby broke the format of standard country radio, mixing country and pop with entertainment news and information, and has interviewed some of the biggest names in the business, including Luke Bryan, Taylor Swift, Blake Shelton, Tim McGraw, Lady Antebellum, and Jason Aldean. Yet despite the glamour, fame, and money, Bobby has never forgotten his roots, the mom and grandmother who raised him, the work ethic he embraced which saved him and encouraged him to explore the world, and the good values that shaped him. In this funny, poignant memoir told in Bobby's distinctive patter, he takes fans on a tour of his road to radio. Bobby doesn't shy away from the curves he continues to navigate--including his obsessive-compulsive disorder--on his journey to find the happiness of a healthy family. Funny and tender, raw and honest, Bare Bones is pure Bobby Bones--surprising, entertaining, inspiring, and authentic.

From the Back Cover #1 Bestseller-- New York Times, Wall Street Journal, USA Today From Mountain Pine To Your Morning Drive . . . Millions of radio listeners nationwide tune in every morning to The Bobby Bones Show , the most popular country music show in America. Its host, Bobby Estell, known to music lovers as Bobby Bones, entertains listeners with his witty banter and the easy, everyman rapport he has with stars like Carrie Underwood, Garth Brooks, and Jason Aldean. Despite his fame and success, Bobby has stayed true to his roots and where he came from--the place where he learned that Fight. Grind. Repeat. mantra that makes him one of the busiest guys in the business. Raised by an alcoholic single mother and an enterprising grandmother who taught him to shop at garage sales, play poker, and love music, Bobby spent his childhood in the hills and trailer parks of Mountain Pine, Arkansas. But Bobby refused to limit his dreams, and when he got his first radio as a birthday present, he focused on getting on the air and beyond. Full of stories from his childhood, his brushes with the best and the beautiful of music--hint: not all of them like him (oh well)--the hijinks and danger that have been a part of his journey, and rippling with his self-deprecating humor, Bare Bones is the heartfelt, honest tale of someone who has truly lived the American dream.