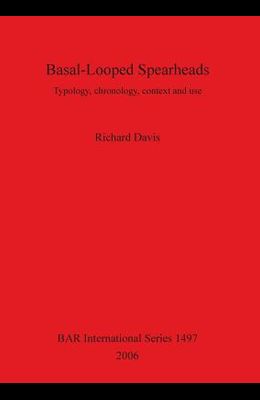 Basal-looped spearheads were prevalent in the British Isles during the later part of the Middle Bronze Age. Their main period of use covered the Taunton and Penard industrial phases in Britain, and the contemporary Bishopsland phase in Ireland, dating to around 1300-1000 BC. Distribution also extended to the northwestern area of Continental Europe. The diagnostic attribute of these spearheads is the loops at the base of the blade, either incorporated with in the blade, or projecting below it. Ireland is likely to have been the place of origin of the category, with manufacturing taking place in Ireland, Britain and on the Continent. 551 basal-looped spearheads are included in the studys catalogue. 54% of these come from Britain, 32% from Ireland and 14% from the Continent. A typology is developed for the category, sorting them into eight main types and establishing the chronological sequence of these types. Recovery contexts are weight ed to watery locations at 80% of the total, supporting the interpretation that much of the deposition was purposeful, and represented a form of votive offering. The condition of the spearheads is analysed, from which it can be concluded that at least two thirds had been used in some form of combat. An experimental programme was undertaken with replicas which were comb at tested at the Royal Armouries, Leeds. The programme demonstrated the versatility of the basal-looped spearhead, and its overall superiority to the rapier, the main contemporary sidearm. The basal-looped spearhead may therefore be considered the primary weapon of its time in the British Isles, with use in warfare and on ceremonial occasions. Its supremacy began to be eclipsed during the Penard phase with the introduction of the early flange-hilted swords from the Continent.