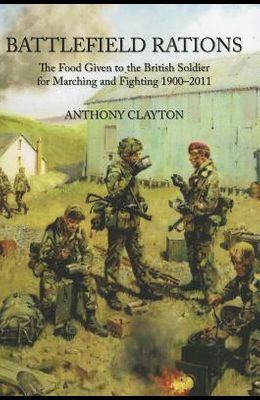 Battlefield Rations: The Food Given to the British Soldier for Marching and Fighting 1900-2011

An Army marches on its stomach, observed Napoleon, a hundred and fifty years later General Rommel remarked that the British should always be attacked before soldiers had had an early morning cup of tea. This book, written to raise money for the Army Benevolent Fund and with a Foreword by General Lord Dannatt, sets out the human story of the food and brew-ups of the front-line soldier from the Boer War to Helmand. Throughout, the importance of the provision of food, or even a simple mug of tea, for morale and unit fellowship as well as for the need of the calories required for battle is highlighted with many examples over the century. For many, until 1942, the basis of food was bully beef and hard biscuit, supplemented by whatever could be found locally, all adequate but monotonous. Sometimes supply failed, on occasions water also. The extremes of hardship being when regiments were besieged, as in Ladysmith in the Boer War and Kut el-Amara in Iraq in the 1914-18 war. At Kut soldiers had, at best, hedgehogs or birds fried in axle-grease with local vegetation. On the Western Front the Retreat from Mons in August 1914 was almost as severe. The transport of food is as interesting a story as the food itself, ranging from oxen, horses, mules, camels, even reindeer and elephants to motor transport and aircraft in different theatres at different times. The first airdrop of food, not very successful, was in fact at Kut el-Amara in 1916.The inter-war years experiences of mountaineers and polar explorers, supplemented by academic diet studies of the unemployed in London and North England led to the introduction of the varied composite, or 'compo' rations, marking an enormous improvement in soldiers' food, an improvement commented upon by the bully beef and biscuits-fed 8th Army advancing into Tunisia from Libya on meeting the 1st Army which had landed in Algeria with tins of compo. The Italian campaigns of 1943-45, especially the Salerno and Anzio landings and the battle for Monte Cassino, presented particular difficulties. At Cassino food reached forward units on mules with Basuto muleteers and Indian porters for the last stage to men in ground holes or scrapes. Soldiers landing in Normandy and fighting on into Germany were generally well fed even during a hard 1944-45 winter. The worst suffering, though, fell on soldiers in the Burma campaign, especially in the Chindit columns. In one unit, the only food available at one time was the chaplain's store of Communion wafers. Many men died unnecessarily from the results of poor feeding. In the end of empire colonial campaigns soldiers were generally well fed even if the food was monotonous. Units in the Korean War experienced difficulties at the onset; in the Borneo jungle campaigns of the 1960s the problem was not so much the provision of food for patrols as how to eat it without the smell of the food and refuse from the packs giving positions away. For the Falklands War special cold weather compo had to be provided and was eaten on the long 'yomps' or 'tabs' marches. The soldier on the streets of Northern Ireland often lived on egg banjo sandwiches but real hardship was suffered by one Welsh battalion besieged by the Serbs in Gorazde during the Bosnia operations when Vitamin C deficiency led to scurvy. The book ends with food supply, often based on whole or part swapping with American military food (usually below British standards) in the Iraq operations and in Afghanistan. An appendix sets out the contents of a typical box of rations issued to a soldier in Helmand in 2011, very generous in quantity and easily prepared. One side of the box carries a stern message to the effect that a soldier must consume the entire contents in order to maintain full fighting efficiency. Such injunctions were not marked on the boxes of food sent forward to the troops in the Boer War; there the boxes were stamped with the initials of the Senior Catering Office Field Force. Scoffs here at last. The work has been compiled from documents in the Royal Logistic Corps Museum at Deepcut, from memoirs, letters and interviews, and from the superb collection of regimental histories in the library of the Royal Military Academy Sandhurst. All royalties due to the author for this book will be sent to the Army Benevolent Fund, The Soldiers' Charity.REVIEWS ... provides intricate details of the methods used to prepare food, and the differences between male and female rationing ... enough here to provide food for thoughtHistory of War Magazine Not the longest by any means, it is crammed with useful information and is very entertaining with it ... Dr Clayton takes us from the Boer War to the present day in a brisk and ebullient manner. There is nothing to dislike here, the info is all handy and some is quite surprising. War History Online informative, interesting, and will bring back veterans memories Soldiers of the Queen ... a splendid book ... Bulletin of the Military Historical Society the variety of the research is a key strength of this study, and Clayton links it together into a narrative that has a wry humor as well as an engaging energy, which is enhanced by the wealth of illustrations. Journal of the Society for Army Historical Research

Books similiar to Battlefield Rations: The Food Given to the British Soldier for Marching and Fighting 1900-2011

List of All Editions of Battlefield Rations: The Food Given to the British Soldier for Marching and Fighting 1900-2011