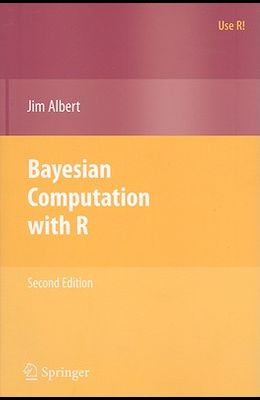 There has been dramatic growth in the development and application of Bayesian inference in statistics. Berger (2000) documents the increase in Bayesian activity by the number of published research articles, the number of books, andtheextensivenumberofapplicationsofBayesianarticlesinapplied disciplines such as science and engineering. One reason for the dramatic growth in Bayesian modeling is the availab- ity of computational algorithms to compute the range of integrals that are necessary in a Bayesian posterior analysis. Due to the speed of modern c- puters, it is now possible to use the Bayesian paradigm to 't very complex models that cannot be 't by alternative frequentist methods. To 't Bayesian models, one needs a statistical computing environment. This environment should be such that one can: write short scripts to de?ne a Bayesian model use or write functions to summarize a posterior distribution use functions to simulate from the posterior distribution construct graphs to illustrate the posterior inference An environment that meets these requirements is the R system. R provides a wide range of functions for data manipulation, calculation, and graphical d- plays. Moreover, it includes a well-developed, simple programming language that users can extend by adding new functions. Many such extensions of the language in the form of packages are easily downloadable from the Comp- hensive R Archive Network (CRAN).

From the Back Cover There has been a dramatic growth in the development and application of Bayesian inferential methods. Some of this growth is due to the availability of powerful simulation-based algorithms to summarize posterior distributions. There has been also a growing interest in the use of the system R for statistical analyses. R's open source nature, free availability, and large number of contributor packages have made R the software of choice for many statisticians in education and industry. Bayesian Computation with R introduces Bayesian modeling by the use of computation using the R language. The early chapters present the basic tenets of Bayesian thinking by use of familiar one and two-parameter inferential problems. Bayesian computational methods such as Laplace's method, rejection sampling, and the SIR algorithm are illustrated in the context of a random effects model. The construction and implementation of Markov Chain Monte Carlo (MCMC) methods is introduced. These simulation-based algorithms are implemented for a variety of Bayesian applications such as normal and binary response regression, hierarchical modeling, order-restricted inference, and robust modeling. Algorithms written in R are used to develop Bayesian tests and assess Bayesian models by use of the posterior predictive distribution. The use of R to interface with WinBUGS, a popular MCMC computing language, is described with several illustrative examples. This book is a suitable companion book for an introductory course on Bayesian methods and is valuable to the statistical practitioner who wishes to learn more about the R language and Bayesian methodology. The LearnBayes package, written by the author and available from the CRAN website, contains all of the R functions described in the book. The second edition contains several new topics such as the use of mixtures of conjugate priors and the use of Zellner's g priors to choose between models in linear regression. There are more illustrations of the construction of informative prior distributions, such as the use of conditional means priors and multivariate normal priors in binary regressions. The new edition contains changes in the R code illustrations according to the latest edition of the LearnBayes package. Jim Albert is Professor of Statistics at Bowling Green State University. He is Fellow of the American Statistical Association and is past editor of The American Statistician . His books include Ordinal Data Modeling (with Val Johnson), Workshop Statistics: Discovery with Data, A Bayesian Approach (with Allan Rossman), and Bayesian Computation using Minitab .